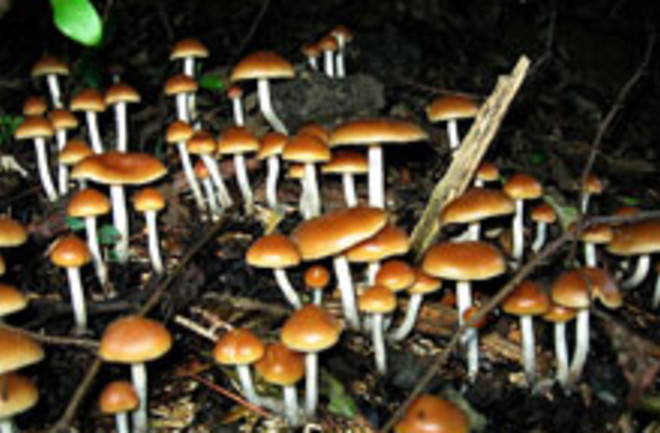 Hallucinogenic drugs are making a comeback--not among the restless youth of today, but among medical researchers. Doctors are increasingly testing illegal drugs like LSD, psychedelic mushrooms, and the party drug ketamine for beneficial effects, and are suggesting that these discredited drugs could have a place in modern medicine. The latest study, published in the Archives of General Psychiatry, found that the active ingredient in hallucinogenic mushrooms helped alleviate depression and anxiety in terminal cancer patients.

"This is a landmark study in many ways," said Dr. Stephen Ross, clinical director of the Center of Excellence on Addiction at New York University's Langone Medical Center, who was not involved in the research. "This is the first time a paper like this has come out in a prestigious psychiatric journal in 40 years." [Los Angeles Times]

The small pilot study included only a dozen volunteers, so the findings are far from conclusive. The volunteers ranged in age from 36 to 58; all had been diagnosed with advanced-stage cancer and had considerable anxiety as a result of their disease. Each patient had one session in which they were given psilocybin

, the active ingredient of magic mushrooms, and another session when they were given a placebo that caused a physiological reaction--still, in most cases the patients could figure out if they'd been dosed or not. In all the sessions the patients were kept under supervision for six hours and were encouraged to lie in the dark while listening to music (no word from the researchers on whether Pink Floyd was provided). In follow-up surveys, the patients all reported reduced anxiety and depression for up to six months after they tripped on psilocybin; no such effect was seen after the placebo session. Lead researcher Charles Grob says the study picks up on research that was begun in the 1950s, when powerful substances like psilocybin were considered a promising field of study in psychiatry.

Researchers said the studies were abandoned in the early 1970s when hallucinogenic drugs such as LSD -- lysergic acid diethylamide -- became widely used on the streets, leading to strict federal laws regulating their use....

"It was something of a public health crisis. Everything had to be shut down," Grob said [Reuters]

However, researchers all caution cancer patients not to score street drugs and start experimenting themselves. Roland Griffiths, who studies psilocybin but wasn't involved in the current study, says such illegal drugs should still be confined to clinics and labs.

The drugs "are, in fact, dangerous and, under nonmedical conditions, people can have fearful reactions, panic reactions, engage in dangerous behavior and do great harm to themselves," Griffiths said. "But the studies underscore the fact that we can screen people and prepare them in a way that minimizes any harmful effects." [Los Angeles Times]

80beats: 1st Medical Studies on Pot in 20 Years Find It Does Relieve Pain

DISCOVER: Peyote on the Brain

The Placebo Effect: A Mystery in Potential Therapy