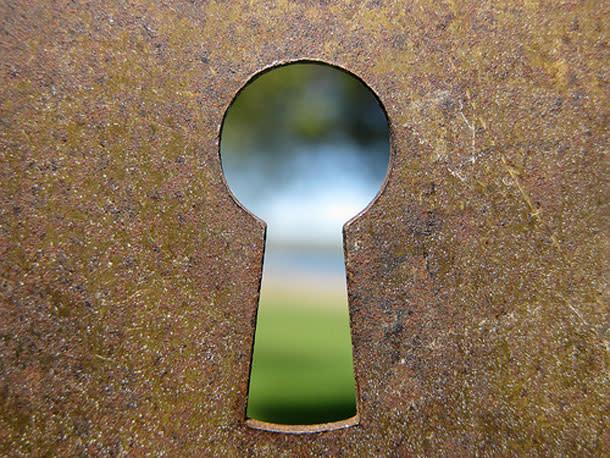 When I used to work at a cancer charity, I would often hear people asking why there isn’t a cure yet. This frustration is understandable. Despite the billions of dollars and pounds that go into cancer research, and the decades since a war on cancer was declared, the “cure” remains elusive. There is a good reason for that: cancer is really, really hard. It is a puzzle of staggering complexity. Every move towards a solution seems to reveal yet another layer of mystery. For a start, cancer isn’t a single disease, so we can dispense with the idea of a single “cure”. There are over 200 different types, each with their own individual quirks. Even for a single type – say, breast cancer – there can be many different sub-types that demand different treatments. Even within a single subtype, one patient’s tumour can be very different from another’s. They could both have very different sets of mutated genes, which can affect their prognosis and which drugs they should take. Even in a single patient, a tumour can take on many guises. Cancer, after all, evolves. A tumour’s cells are not bound by the controls that keep the rest of our body in check. They grow and divide without restraint, picking up new genetic changes along the way. Just as animals and plants evolve new strategies to foil predators or produce more offspring, a tumour’s cells can evolve new ways of resisting drugs or growing even faster. Now, we know that even a single tumour can be a hotbed of diversity. Charles Swanton from Cancer Research UK’s London Research Institute discovered this extra layer of complexity by studying four kidney cancers at an unprecedented level of detail. He showed that the cells from one end of the tumour can have very different genetic mutations to the cells at the other end. These are not trivial differences. These mutations can indicate a patient’s prognosis, and they can affect which drugs a doctor decides to administer. The bottom line is that a tumour is not a single entity. It’s an entire world. 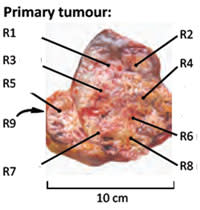 This is one of the tumours that Swanton worked with. It was removed from the kidney of a patient being treated for cancer London’s Royal Marsden hospital. Swanton’s team took nine samples from different parts of the fist-sized mass, as well as other places where it had spread to – the space around the kidney and the patient’s chest. Swanton found that even the primary tumour was surprisingly varied. He found 128 mutations among the various samples, but only a third of these were common to all of them. A quarter of the mutations were “private” ones – unique to a single sample. The tumour had also split down two evolutionary lines. One area – part of R4 in the picture – had doubled its usual tally of chromosomes and seeded all the secondary tumours in the patient’s chest. The other branch had spawned the rest of the primary tumour. Even though this tumour looks like a single mass, whose cells all descended from a common ancestor, its different parts arehave all evolved independently of one another. For example, Swanton found that only one known kidney cancer gene – VHL – was consistently mutated throughout the samples. It was the only one present in the “trunk” of the tumour’s evolutionary tree (the blue line in the image below). The two main branches each picked up their own mutations. However, Swanton also found signs of convergent evolution, where different populations hit on the same adaptations on their own. In this case, three separate parts of the main tumour had disabled the same gene – SETD2 – in different and independent ways. Three other kidney tumours showed the same degree of bewildering variety and convoluted history. 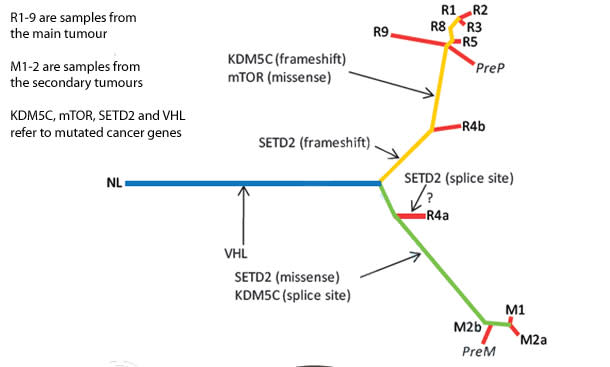