A Vulnerable Spot on the Ebola Virus' Shell 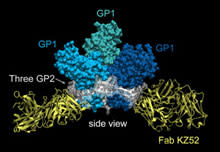 has receded from the headlines since the mid- 1990s when the world briefly panicked about an African outbreak of the terrifying disease, which causes massive bleeding and kills up to 90 percent of the people it infects. Thankfully, scientists haven't forgotten about the virus, and are still trying to unlock its secrets. In a new report, researchers say they've finally got a good image of the protein "spike" that the virus uses to enter healthy human cells. Researchers also say that

by revealing the protein's shape and understanding how it works, they have exposed chinks in Ebola's armor that could be targeted for treatment [Bloomberg]. Lead researcher Erica Ollman Saphire says the spike is almost entirely conceale

"It's kind of like Harry Potter wrapped in an invisibility cloak. But there are three or four little sites peeking out," she added. These may provide a target for a drug or vaccine, or perhaps an immune-based treatment for Ebola, she said [Reuters].

In the report, which was published in the journal Nature [subscription required], researchers describe a spike that is

wrapped in benign carbohydrates that mask the virus's deadliness, allowing it to elude immune system scouts [Scientific American]. But when the Ebola virus approaches the cell, Ollmann Saphire hypothesizes that these cloaking molecules are shed in layers

Researchers hope that this new knowledge will aid in the development of drugs that can recognize the virus and knock it out before it attaches to healthy host cells.

There's currently no treatment for Ebola, which the World Health Organization says has infected at least 1,850 people so far, mostly in sub-Saharan Africa. Death rates vary between different strains of the virus, but of all reported cases about 600 patients survived. As DISCOVER reported, the virus has recently cut a devastating swath through gorillas in central Africa; however the surviving gorillas may soon be protected by experimental vaccines that have shown early success in lab monkeys.