A Tropical, Fatal Fungus Gains a Foothold in the Pacific Northwest 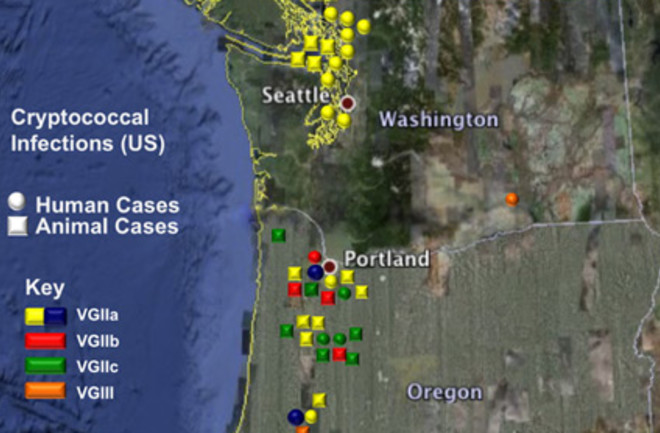 A rare but potentially life-threatening tropical fungus is spreading through the Pacific Northwest, researchers have reported. The culprit is a new strain of the Cryptococcus gatti fungus, and is known to have been lethal in 25 percent of the reported human infections. C. gatti

usually only infects transplant and AIDS patients and people with otherwise compromised immune systems, but the new strain is genetically different, the researchers said. "This novel fungus is worrisome because it appears to be a threat to otherwise healthy people" [Reuters]

, says lead researcher Edmond Byrnes. However, scientists aren't sounding a public health alert because the death toll is still very small--in the United States, five of the 21 people who contracted the fungus in the have died. The new strain of the C. gatti fungus has been found in both humans and animals like cats, dogs, and sheep, researchers write in the journal PLoS Pathogens. Because its such a rare infection, researchers warn that physicians could potentially miss diagnosing it.

C. gatti is a tropical fungus, normally found in Southeast Asia, Australia, and South America; it arrived on our continent in 1999 via imported plants or trees. In the past five years it migrated from Canada's British Columbia province into the United States. The fungus is thought to live on the bark of about 10 species of trees, including Douglas fir and western hemlock. Epidemiologist Julie Harris of the Centers for Disease Control says the

primary victims of infection have been people who spend a lot of time outdoors, often in contact with soil, and those who do woodwork and construction [Los Angeles Times].

Infection occurs when someone inhales the floating spores given off by the fungus. The spores are known to lodge in the lungs and cause a persistent cough and breathing difficulties, and have also been linked to meningitis and weight loss. But unlike bacterial or viral infections, this fungal infection isn't transferable and can't be passed from person to person. Treatment for the infection includes a long course of anti-fungal medication. While the new strain is “highly virulent,” lead researcher Byrnes says there's no cause for panic--just for vigilance. "

Overall it's a pretty low threat, and it's still uncommon in the area, but as the range of the organism expands and the number of cases increases accordingly, it's becoming more of a concern," he says [CNN].

Epidemiologist Philip Alcabes, Ph.D told CNN that the emergence of a new, mutant C. gatti strain is “pretty normal” and that “it is an expectable evolutionary event in nature that has a slight amount of human fallout.” He adds that if this fungus follows previous patterns, its virulence should diminish eventually. Related Content: 80beats: Spores in Mastodon Dung Suggest Humans Didn’t Kill Off Ancient Mammals 80beats: How the Frog-Killing Fungus Does Its Dirty Work 80beats: Fungus Behind the Irish Potato Famine Strikes the U.S.Image: Duke University