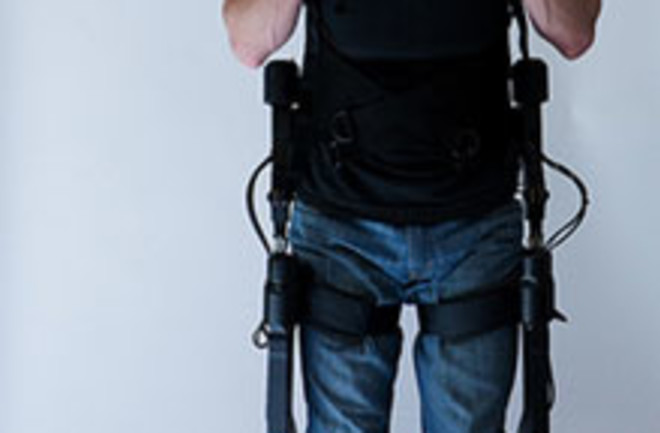 Hugging someone standing up. Going on a hike. Making eye contact with someone at their level, instead of always being looked down upon. These are simple things that people stuck in wheelchairs don't have a chance to experience in daily life. Berkeley Bionics is giving those experiences back to paraplegics with the introduction of an exoskeleton suit called eLEGS--a battery powered, artificially intelligent, wearable outer skeleton that gives these people back their freedom. People wearing these devices won't be a common sight just yet--a suit is currently priced at about $100,000 a pop, and they'll only be available for use in clinics at first--but it's an exciting step forward. The person straps into an exoskeleton made of carbon fiber and steel, which weighs 45 pounds. Sensors in the legs convey their position to a control unit contained in a backpack, and the controller tells which joints to bend to create a natural gait. The user gives the suit commands using two high-tech crutches: pressure on both tells the motorized legs to stand up, pressure on one means to step with the opposite leg. The suit's battery pack can power up to six hours of walking, and it can reach speeds above two miles per hour. Amanda Boxtel, who was paralyzed from the waist down in a skiing accident 18 years ago, tried out the device and says she took to it quickly.

"Walking with eLEGs took some rewiring and relearning," says Boxtel, "but my body has the muscle memory. And I learned to walk really fast." [New Scientist]

The suit will be used in a clinical trials at select rehabilitation centers starting in early 2011, and its makers hope a commercial model won't be too far behind. Berkeley Bionics wants to make a lighter, thinner, and cheaper model (hopefully closer to $50,000, Berkeley Bionics CEO Eythor Bender says

) available for home use by 2013. Hit the jump for more info, and a poignant video of several paralyzed people giving eLEGS a tryout. Berkeley Bionics isn't the only company in the exoskeleton game. Argo Medical Technologies

, a company from Israel, is already doing clinical trials and hopes to have its brand of ReWalk legs

available in 12 to 18 months. There has also been long-standing interest in building exoskeletons that turn normal grunts into super-soldiers

. In fact, that military research is where the eLEGS got their start. They're modeled after an earlier exoskeleton design by Berkeley Bionics, the HULC, which enabled soldiers to carry over 200 pounds of weight for hours at a time. But the company designed eLEGS specifically for people who are wheelchair-bound. And the few people who have tried out the device clearly appreciate it.

"To take my first step in the eLegs was just astounding," Boxtel says with tears in her eyes, "because I bent my knee for the first time in 18 years and I placed my heel on the ground. And then I transferred my weight. And then I took another step. And another one. And it was so natural, and that was what really gripped me." [CNET]

Being able to stand upright is not only good for patients' mental well-being, it also aids digestion and blood circulation to the extremities. But some experts think the technology needs more refinement before its ready for everyday life.

Grant Elliot, an exoskeleton researcher at the Massachusetts Institute of Technology's Media Lab, says rehabilitation devices like eLEGS and ReWalk are promising. Still, he says that attention needs to be paid to such devices to ensure they remain compact enough for their users to move freely without bumping into objects. "Humans are used to moving through human-sized spaces, like narrow hallways," says Elliot. [New Scientist]

Related content: 80beats: The Latest Robot From Honda: A “Walking Assistant” to Push You Upstairs

Science Not Fiction: We Can Rebuild You: 8 Ways Science Can Fix Your (or Your Cat’s) Broken Body