A Mind in Time

An unprecedented view of one person’s brain function over many months could unlock new therapies. 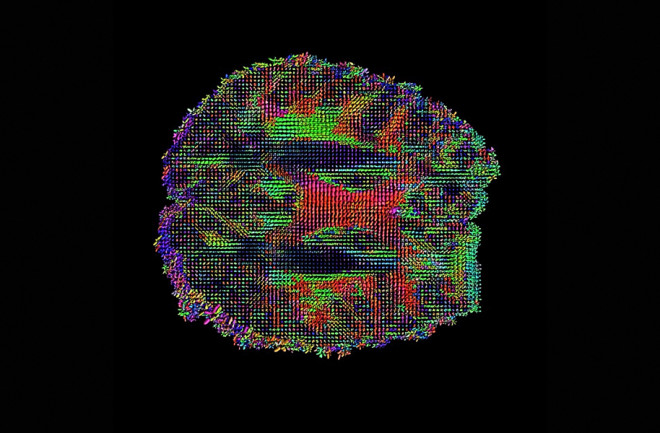 Two mornings a week for the better part of an 18-month stretch, you could find Russell Poldrack with his head inside a giant metal doughnut — the business end of a magnetic resonance imager. As Poldrack lay still for 10 noisy minutes, the machine measured the activity throughout his brain’s neural networks. Roughly once-a-week blood draws followed, checking nutrient and gene expression levels in his body.

In total, Poldrack racked up 104 gratingly loud brain scans. He got stuck by needles, oh, four dozen times. On top of all that probing and poking, he also kept frequent logs of diet, sleep and stress.

Poldrack took the axiom “know thyself” to obsessive new levels in the service of his MyConnectome project, the most intensive examination undertaken of a single living person’s brain. MyConnectome aims to plug gaps in the fundamental understanding of how activity varies in the human brain, across the 100 trillion inter-connections of its 100 billion-odd neurons.

One of these knowledge gaps is temporal. Scientists have studied brain changes on short terms of seconds and minutes, such as when research subjects complete a task, as well as on the long term of years, documenting cognitive decline during the aging process. But anything in between is unknown, essentially mentis incognita.

“No one has ever looked at how the brain varies over the course of days, weeks and months,” says Poldrack, a psychologist and neuroscientist at Stanford University.

A second gap is personal. Imaging studies — which for decades have revealed the brain regions behind our behaviors, appetites and mental disorders — have tended to lump together scans from a bunch of people, in the process overlooking individual cerebral variations. Studies have also largely assumed that measuring someone’s brain function at a point in time is generally representative of that person’s daily function at that point in life.

That notion appears way off the mark, though, for people diagnosed with specific psychiatric disorders. For example, those with schizophrenia may end up in weeks-long active phases of disease, experiencing hallucinations, delusions, even full-blown psychosis. Depression and bipolar disorder are other conditions that flare, then dissipate as the brain returns to an even keel.

To open up new roads into treating these and other diseases, MyConnectome and studies like it are capturing a normal brain’s ebbs and flows. The approach should help make personalized medicine possible, tailored to each patient’s unique neural wiring diagram, or connectome.

“If we want to understand fluctuations in disease, the first thing we need to do is to understand how a healthy person’s brain function fluctuates,” says Poldrack.

Logistical roadblocks have long stymied the collection of brain-and-body fluctuations. What healthy person would want to report to a lab for frequent MRIs and jabs? And who would pay for the procedures?

Those objections became moot for Poldrack several years ago, while at the University of Texas at Austin. A friend involved in the Quantified Self, a movement embracing technology for self-tracking, finally convinced him.

Data from Poldrack’s brain scans show changes in coordination between regions for movement control, attention and vision, as he shifted between states of being fasted (left) and fed (right).

In subjecting himself to MyConnectome’s demands, Poldrack drew inspiration from numerous self-experimenting scientists. One such “human guinea pig,” Michael Snyder, is now a colleague at Stanford.

In 2012, Snyder and his research team published a groundbreaking study in which they analyzed the levels of 40,000 molecules from 20 of Snyder’s own blood samples, taken over 14 months. The effort yielded the first “integrative personal-omics profile,” or iPOP, documenting Snyder’s unique set of active genes, metabolites, proteins and other biomolecules.

Snyder’s research goals were similar to Poldrack’s MyConnectome in pointing the way toward a precision kind of medicine, focusing on patients’ particular biochemistries, as opposed to today’s one-size-fits-most approach.

“Snyder’s work made me think I can do interesting science with an n of 1,” says Poldrack, using the scientific jargon for a sample size consisting of just a single individual. MyConnectome was born.

Although analysis continues for the massive pile of data gathered from September 2012 to March 2014 for MyConnectome — or the “Russ-ome,” as Poldrack’s labmates call it — some intriguing correlations have already emerged.

Before his Tuesday MRI scans, Poldrack fasted and gave up his morning coffee. On those days, the scan revealed stronger signals of coordination between regions for somatomotor (which senses touch and controls movement), attention and vision. “These studies are a window into the brain-body connection,” says Poldrack. Also, the metabolic markers and levels of gene activity in Poldrack’s blood varied considerably with diet and brain function, as well as the severity of his psoriasis, an autoimmune disease that causes his scalp to flake.

Another important finding was the fluctuating activity within certain regions in Poldrack’s brain, which stood out from the averaged point-in-time scans of multiple people used in conventional research. Those blended scans usually find the greatest difference in subjects’ prefrontal cortex, the seat of individual personality. Poldrack’s data suggests researchers are missing the even greater fluctuations in an individual’s other brain regions over time. That means data on potentially key differences within individuals — and their relation to wellness and illness — is getting lost in the wash, Poldrack says.

Future studies could flesh out the significance of the “Russ-ome’s” idiosyncrasies by comparing them with the Human Connectome Project (HCP), which Poldrack has served on the advisory board of since it launched six years ago. This major international effort is pooling the snapshot scans of 1,200 individuals to create a generic, but authoritatively thorough, baseline brain map.

“When we put the datasets side to side, there will likely be some interesting insights about how Russ’ brain and its structural organization relate to the hundreds of individuals we have charted,” says HCP neuroscientist David Van Essen of Washington University in St. Louis.

Numerous researchers are currently delving into Poldrack’s public datasets and have expressed interest in pursuing their own MyConnectome-style studies, this time involving multiple individuals.

Stanford’s Snyder is pleased about the growing push to understand human biological variation via personal connectome and other “-ome” profiles, such as metabolomes (the total metabolites present at a given time in our bodies) and proteomes (ditto for proteins). “My own view about this is you can’t have enough of these profiles,” Snyder says. “The more we get, the more we learn, and we’re already learning that everyone’s baseline is different. People are poised very differently to respond to environmental cues.”

Poldrack and Snyder hope that the vastly expanded and frequent testing they’ve tried to pioneer on themselves will help personalize medicine, leading to improved diagnoses and prognoses. “We’ll have a whole different world where we’re measuring people in a lot more sensitive fashion,” says Snyder.

His own experience is a telling one: During Snyder’s deep, inward look for the iPOP project, he witnessed himself in real-time unexpectedly develop Type II diabetes. He had none of the common risk factors and knew of no family history of diabetes. Thanks to the frequent monitoring, and catching the disease early, Snyder was able to respond and slow its progression.

Poldrack is likewise hoping for further insight into the foods, mental states and other factors that exacerbate his psoriasis. As researchers tease out the daily goings-on of singular minds, perhaps millions of those with mental illness can hold out similar longings for relief as certain “triggers” of their conditions are identified.

“Probably the best thing that can come out of [MyConnectome] is inspiring someone to go and do a really great job with a big population of people studied over a long period of time,” says Poldrack. “We want to answer the question of what’s going wrong in the brain and the body.”