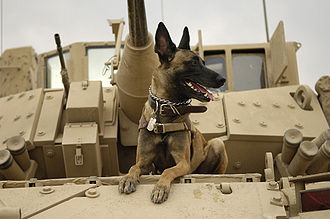 The Pith: Wolves and coyotes exhibit geographic population structure. The red wolf may "only" be a coyote with a minor admixture of wolf, instead of a "real species."

I like dogs. For various structural reasons I am not able to live with a dog right now (not to mention the required investment of time & energy). But the whole military dog storyline associated with the killing of Osama Bin Laden has me thinking a bit more deeply of the co-evolutionary nature of dog-human relationships. Whether dogs have theory-of-mind is controversial, but there's no doubt that they're relatively well adapted to operate with humans relatively efficiently as part of a dual-species team. From an evolutionary and genomic perspective dogs are also of interest. Like humans dogs exhibit a huge range of phenotypic variation despite relatively recent common origin. The species which they presumably are derived from, wolves, are intelligent social creatures whose natural range is very expansive indeed. I believe that the general dynamics of evolution and genetics which are operative amongst canids can give us insight into the processes which shape our own species. In part that is due to broad similarities across the two lineages, but in part it is because the story of dogs and the story of humans are not separate, but part of a broader bio-cultural narrative which has played out over the last 50,000 years.

So you better be sure that my eyes lit up when I saw this new paper in Genome Research, A genome-wide perspective on the evolutionary history of enigmatic wolf-like canids. It's a huge sample of canids from across the world, surveyed on ~50,000 single nucelotide polymorphisms (at least at locations which are SNPs in domestic dogs). The whole standard panoply of PCA and model free ancestry inference tools which we are familiar with from human genomics is now applied to canids in this paper. First, let's hit the abstract:

High-throughput genotyping technologies developed for model species can potentially increase the resolution of demographic history and ancestry in wild relatives. We use a SNP genotyping microarray developed for the domestic dog to assay variation in over 48K loci in wolf-like species worldwide. Despite the high mobility of these large carnivores, we find distinct hierarchical population units within gray wolves and coyotes that correspond with geographic and ecologic differences among populations. Further, we test controversial theories about the ancestry of the Great Lakes wolf and red wolf using an analysis of haplotype blocks across all 38 canid autosomes. We find that these enigmatic canids are highly admixed varieties derived from gray wolves and coyotes, respectively. This divergent genomic history suggests that they do not have a shared recent ancestry as proposed by previous researchers. Interspecific hybridization, as well as the process of evolutionary divergence, may be responsible for the observed phenotypic distinction of both forms. Such admixture complicates decisions regarding endangered species restoration and protection. 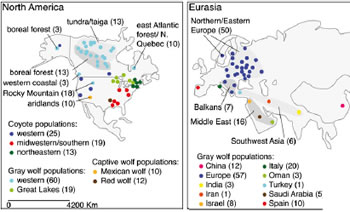 The figure to the left shows the distribution of samples within this study. Though eastern Eurasia seems under-sampled they've got North America and western Eurasia covered. The primary focus is on North American wolves and coyotes, with domestic dogs and Eurasian wolves as outgroups. Part of the reason that this population mix is necessary is that the SNPs are biased toward those which are informative of population structure in dogs, because these markers vary within dogs. The further you get genetically from dogs (e.g., golden jackal) the less informative these SNPs are going to be. Of the North American canids there is a special focus on the Great Lakes wolf and the red wolf, because there have long been debates about the distinctiveness of these two (sub)species, and there's a clear public policy ramification in terms of the Endangered Species Act. Below is a PCA plot which shows the relationship between population clusters along the two largest components of genetic variation in the data. To my surprise the largest dimension separates domestic dogs from all the wild canids: 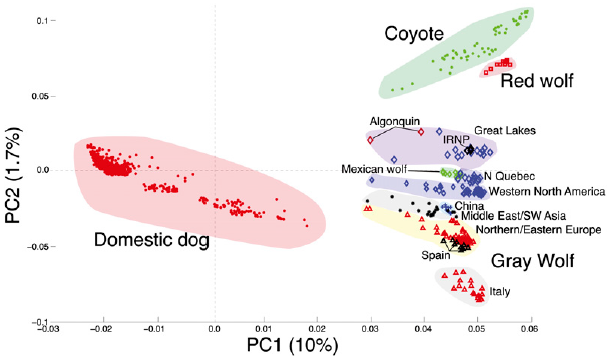 And to the surprise of the authors, and my own frankly, wolves seem to show a lot of geographically correlated population structure. Look at how cleanly Spanish and Italian wolves separate. The strong distinction between these groups may be a relic of the last Ice Age, when these two peninsular populations were genetically isolated. It's surprising because if there's one things wolves can do, it's disperse. Interestingly the red wolf of the American southeast clusters relatively close to the coyotes! And of the other wolves the Great Lakes wolves are the closest to the coyotes. One thing to remember is that an individual's position in these plots can be informative of population wide genetic relationships, or they can be informative of their particular admixture. To get a handle on these particular details the authors looked at two statistics, linkage disequilibrium and runs-of-homozygosity. To be short about it the latter is the best way to check for inbreeding, while the former can give one clues to recent admixture. The figure below shows the results for selected populations. IRNP = Isle Royal National Park in Lake Superior. This is a very isolated population of wolves. 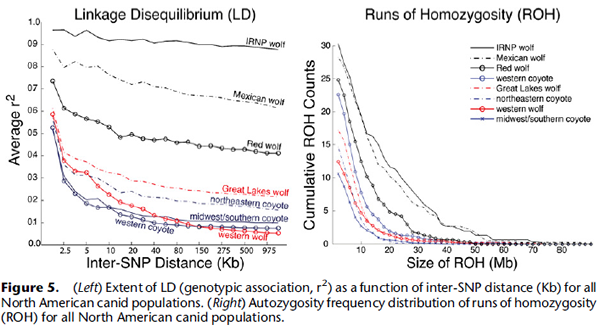 The IRNP is a classic island population which is inbred. It has elevated LD and ROH. The other populations exhibit a variety of results, but the the Mexican and red wolf also exhibit inbreeding or some sort of population bottleneck, though not nearly as much as the IRNP population. So let's see what structure tells us. The nice little visualization below shows the relationship of various populations as one ascends up the K's of structure. On the far left you have coyotes, and far right you have dogs. You see some natural patterns, dogs leaving first, then coyotes, and then Old World wolves. Observe that the red wolf has a strong affinity with coyotes, followed by the Great Lakes wolves. 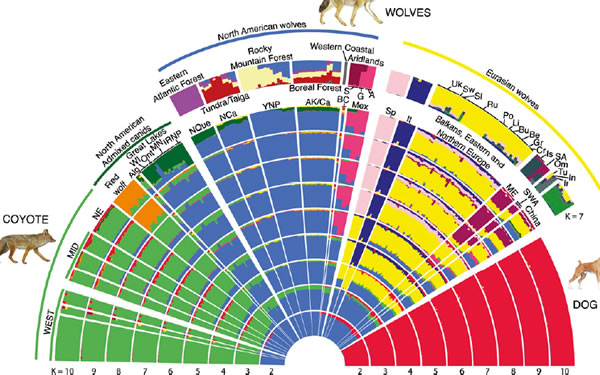 These sorts of algorithms must be viewed with caution, but this group cross-checked them with PCA. The alignment is impressive. After this they also did a finer-grained chromosomal analysis of admixture patterns. They observed that the Great Lakes wolves exhibited a rather wide range of variation in the extent of their minor coyote component. Some individuals were nearly 100% wolf, while others were nearly 50% coyote. The red wolf seems to be predominantly coyote, while coyotes themselves have wolf and dog ancestry. Time scales of admixture were inferred to be in the range of centuries to nearly 1,000 years, with the assumption that there were earlier admixture events. This is perhaps problematic.

The ESA protects species, so what gets labeled a species is a matter of great contention.

The red wolf may be a stabilized hybrid of relatively recent vintage (or perhaps more accurately a back-cross to coyotes from a wolf-coyote hybrid population?). The authors also note that that ironically the red wolf as we know it, on the brink of extinction but brought back through proactive captive breeding, may have been selected for the more wolf-like individuals within the population. So the preconception of the researchers may have changed the nature of the species on a genetic and phenotypic level. We're going to get into the thickets really quickly at this rate. I think the big picture is that we shouldn't fetishize purity of lineage. Another interesting implication of the possibility of long term hybridization is that some of the distinctive alleles of extinct American wolf populations may now only be found in coyotes, since this species was much better at surviving human encroachment. And if wolves went extinct tomorrow, we could reconstruct them from what we find within coyotes I'd think. Citation: