A ball of dough can "learn." What's Donald Trump's excuse? 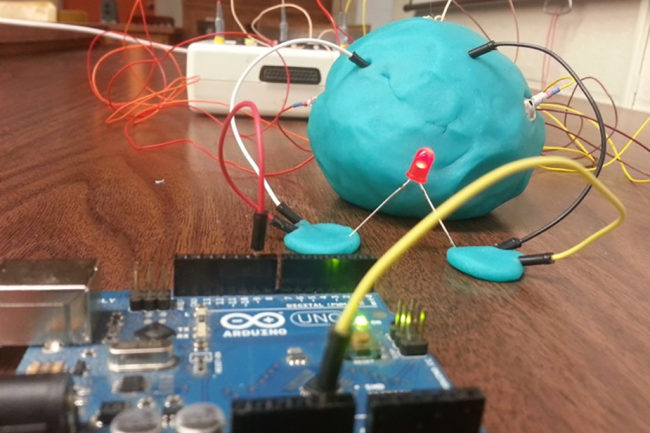 This study definitely falls squarely into our "WTF" category. These researchers set out to determine whether a ball of electroconductive dough (basically flour, water, table salt, vegetable oil, and lemon juice) can be "conditioned" to respond to a stimulus. They hooked up the doughball to jumper cables and exposed it to flashes of LED light paired closely in time with a current. After this training, they then exposed the dough to light with no current, and found that its spectral density resembled that of doughballs that had been shocked. They also saw differences in the dough's microscopic structure after this training process. The researchers interpret these results to mean that the dough had been conditioned to respond to light by expecting a shock, in the same way that Pavlov's dogs were conditioned to drool in anticipation of food after hearing a bell. Critics question whether this can really be defined as "learning", but we do know one thing: this ball of dough is smarter than Donald Trump.

Experimental Evidence of Classical Conditioning and Microscopic Engrams in an Electroconductive Material "Synthetic experimental substrates are indispensable tools which can allow researchers to model biological processes non-invasively in three-dimensional space. In this study, we investigated the capacities of an electroconductive material whose properties converge upon those of the brain. An electrically conductive material composed of carbohydrates, proteins, fats, ions, water, and trace amounts of other organic compounds and minerals was classically conditioned as inferred by electrophysiological measurements. Spectral densities evoked during the display of a conditioned stimulus (CS) probe were strongly congruent with those displayed during the conditioned-unconditioned stimulus pairing (CS-UCS). The neutral stimulus consisted of the pulsed light from a LED. The unconditioned stimulus was an alternating current. Interstimulus intervals >130 ms did not result in conditioned responses. Microscopic analysis of the chemically-fixed substratum revealed 10–200 μm wide ‘vessel structures’ within samples exposed to a stimulus. Greater complexity (increased fractal dimensions) was clearly discernable by light microscopy for stained sections of fixed samples that had been conditioned compared to various controls. The denser pixels indicated greater concentration of stain and increased canalization. Implications for learning and memory formation are discussed." Related content: Retention of memory through metamorphosis: can a moth remember what it learned as a caterpillar?That ape’s got rhythm! Chimpanzees play drums just like humans (with music goodness).Holy carp! Fish can use tools too!