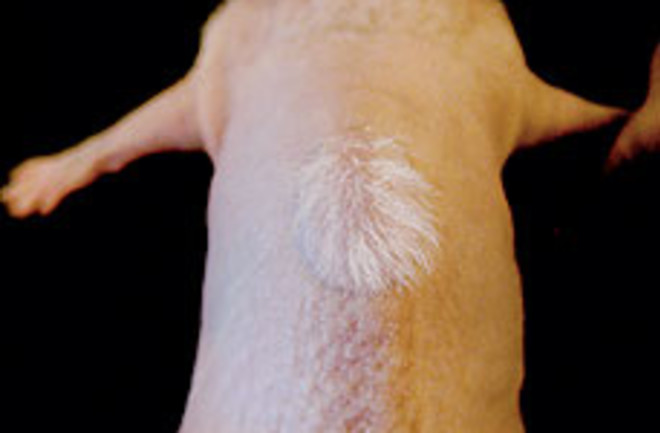 A single stem cell produced the clump of hair growing on this bald mouse’s back, as well s the epidermis, follicles, and sebaceous glands that nurture the fur. | Courtesy of Rockefeller University

The cure for baldness may be imminent. A Rockefeller University research team led by biologist Elaine Fuchs reported last September that they had coaxed adult stem cells to grow hair. When grafted onto bald mice, the cells produced not only furry tufts but stretches of skin complete with the oil-producing glands that help keep it supple as well. “Essentially, you’d put down a forest rather than plant tree by tree,” says Fuchs.

Earlier work hinted that skin follicles harbor stem cells kept in reserve to replace epidermal cells when they die. “The critical question was whether there really is a cell that can do it all—epidermis, hair, sebaceous glands,” says Fuchs. “And now we know that we really have a bona fide stem cell.” That means curing baldness could just be the beginning. “Maybe these stem cells could do other things,” says Fuchs. “Maybe they could make corneas for the treatment of blindness.”

The full potential of various stem cells found in adults is still unknown. “It’s just presumed that they have fewer capabilities than embryonic stem cells,” says Bill Lowry, a coauthor of the study. But, he adds, harvesting adult stem cells from skin has one clear benefit: “It’s such an easily accessible source.”