In the survey below I asked if you knew about how many migrants per generation were needed to prevent divergence between populations. About ~80 percent of you stated you did not know the answer. That was not totally surprising to me. The reason I asked is that the result is moderately obscure, but also rather surprisingly simple and fruitful. The rule of thumb is that 1 migrant per generation is needed to prevent divergence.* It doesn't tell you much in and of itself of course. But if you think about it you can inject that fact into all sorts of other population genetic phenomena. For example, to have selection across two populations which is not reducible to selection within those populations (i.e., inter-demic selection) you need group-level genetic differences. These differences can be measured by the Fst statistic. In short the value of Fst tells you the proportion of variation which can be attributed to between-group differences (e.g., Fst across human races is ~0.15). For natural selection to have any adaptive effect you also need heritable variation. If you have lots of heritable variation selection can be weaker, while if you have little heritable variation selection has to be very strong (see response to selection). Fst is a rough gauge of heritable variation when you are evaluating group level differences. An Fst of 1.0 would imply that the groups are nearly perfectly distinct at the loci of interest, while an Fst of 0.0 would imply that the groups are not genetically distinct at all. With no distinction selection would have no efficacy in terms of driving adaptation. All this is a long way to saying that the 1 migrant rule is one reason that evolutionary biologists take a skeptical position in relation to group selection. It tends to quickly erase the variation which group selection depends upon. To make it concrete here is the equation which you use to generate the equilibrium F statistic: 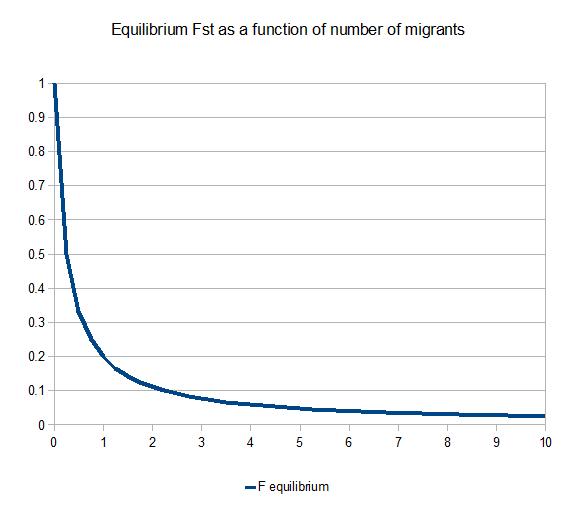 This should make intuitive sense. If there is no migration (gene flow) between populations then over the long term they become perfectly distinct. As you increase migration naturally that is going to homogenize differences between populations. But I suspect the question you may still have is how is it that only a few individuals are necessary in even large populations to prevent differentiation? Here the intuition is simple. In a neutral scenario between-population differences emerge as gene frequencies change over time. The generation to generation change is inversely proportional to population. This is simply the sample variance or transmission noise. The expected deviation is going to be proportional to 1/N, where N is the population (2N for diploid). As N gets rather large you converge upon zero. So as the population gets very large there is less and less divergence which may occur in one given generation. In contrast you have a lot of generation to generation variation, and rapid change in frequency, in a small population. So why only 1 migrant? In a large population 1 migrant does not effect much change, but much change is not necessary. In a small population it has much more impact, but the generation to generation change is also much bigger. These two dynamics work at cross purposes so that the number of migrants needed remains relatively insensitive to population size. * This is the result derived from population genetics, some ecological geneticists have made the case that you may actually need 10 migrants, 1 being the lower boundary.