Yucca Mountain Ruled Out for Storing Nuke Waste. Now What? 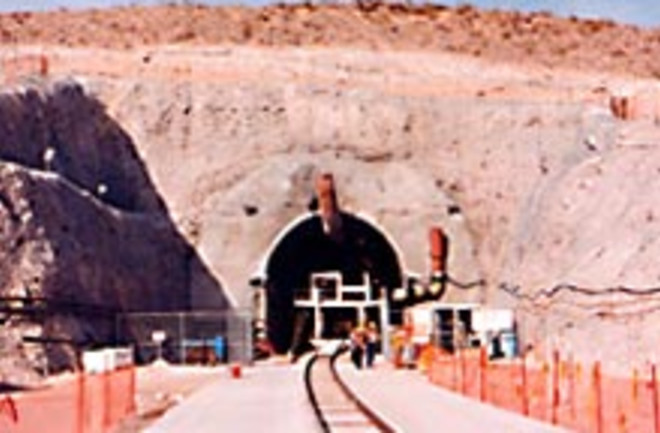 In a blow to the nuclear power industry, the budget released by President Obama last week eliminates most funding for Yucca Mountain, the Nevada site that for decades has been proposed for the permanent burial of radioactive nuclear waste. The decision will likely be an expensive one, considering how much money the federal government might end up owing the utility industry, and how much—up to $10.4 billion—has already been spent and will have been wasted on the search for a nuclear waste repository since 1983.  The courts have already awarded the companies about $1 billion, because the government signed contracts obligating it to begin taking the waste in 1998, but seems unlikely to do so for years. The nuclear industry says it may demand the return of the $22 billion that it has paid to the Energy Department to establish a repository, but that the government has not yet spent [The New York Times]. The 1982 Nuclear Waste Policy Act called for the establishment of a permanent, high-level nuclear waste repository. Eight proposed sites were narrowed to three, then to one. Over the strong objections of Nevada's congressional delegation – and controversy over flawed studies – Congress voted in 1987 to approve Yucca Mountain as the sole candidate for a permanent nuclear waste repository. In 2002, President Bush designated Yucca Mountain as the site, and in June 2008, the Department of Energy submitted its license application [Christian Science Monitor]. There has been fierce opposition to the Yucca Mountain site throughout the decades. In Congress, the battle has been led by Senate majority leader Harry Reid of Nevada, who celebrates the new decision: "President Obama recognizes that the proposed dump threatens the health and safety of Nevadans and millions of Americans. His commitment to stop this terrible project could not be clearer" [Washington Post]. For now, Energy Secretary Steven Chu says that the nearly 60,000 tons of waste in the form of used reactor fuel can remain at nuclear power plants while a new, comprehensive plan is developed. It was the most definitive signal yet that the government's attempt to address the commercial nuclear waste problem is veering in a new direction [Star Tribune]. The decision fulfills a campaign promise made by Obama, but offers no hint of what his administration plans to do instead with the country’s existing nuclear waste, or with the approximately 2,000 tons generated each year by nuclear power plants. The Yucca site was designed specifically to handle spent fuel rods from the nation's 103 nuclear generators…. Keeping the waste at temporary sites is an option in the short term, but experts in the field say it will not serve as a long-term answer for the problem of radioactive waste, which will need to be kept safely stored for at least 1,000 years. Others have advocated reprocessing much of the spent fuel, as is being done in France, but this too is fraught with problems, according to some experts [Washington Post]. Related Content: 80beats: Should Yucca Mountain Hold More Than 77,000 Tons of Nuclear Waste, or None? 80beats: EPA Sets Radiation Limit for Nevadans Living 1 Million Years From Now 80beats: So Much Radioactive Waste, So Little Time DISCOVER: Welcome to Yucca Mountain tells the full story on how the storage facility was deemed an acceptable risk Image: Nuclear Regulatory Commission