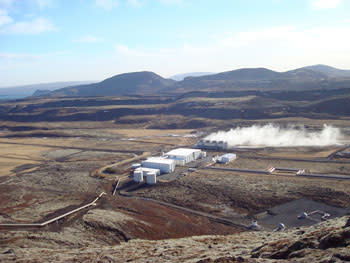 A geothermal plant in Iceland

Iceland's gigantic energy reserves, generated from renewable sources like geothermal vents, are all dressed up with nowhere to go---it's too expensive to get power from the chilly island to anywhere else. But transporting data to and from the island is a different story. Iceland is starting to attract companies that build giant server farms

, lured by the cheap electricity and the possibility of being able to market "green" power. As we've noted before

, data centers, which store information people put in the cloud and handle processing tasks that keep the Internet chugging along, are huge energy users. Their demand for electricity is growing by leaps and bounds, with some estimates holding that by 2020, they will use quadruple the energy they did in 2007. Proposals that data centers move to places where renewable energy is cheap are not new

. But a short article

over at Technology Review notes some signs that this proposed shift is actually happening. Iceland, seeking to turn its electricity surplus to a profitable use that's more environmentally friendly than aluminum smelting, which is the current major user of electricity on the island, is courting data centers, and a company called Verne Global set up shop there in February, Tech Review reports

. Sporting access to 50 megawatts of power, it's one of three data centers now in Iceland. Will all your bits soon be racing to and from Iceland? Probably not the ones involved in processing tasks that require a quick turnaround; it still takes a bit of time (36 milliseconds) to get data from the northern Atlantic to the US. But there are plenty of less-than-urgent tasks that could be handled there, on the cheap, with power than doesn't come from fossil fuels. [via Technology Review