With no La Niña to help cool Earth's fever, last month shattered the mark for warmest August on record 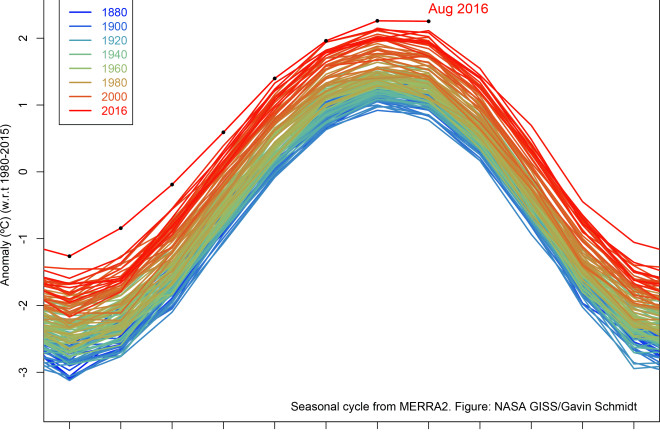 August 2016 was the warmest August in 136 years of modern record-keeping. This continues a streak of 11 consecutive months dating back to October 2015 that have set monthly high-temperature records. (Source: NASA GISS) The heat goes on. And on. According to data released yesterday by NASA, last month was the warmest August on record. That makes it 11 straight months of record-breaking global heat.

Map of August 2016 temperature anomalies. (Source: NASA GISS And as it turned out, August tied with July 2016 for warmest of 1,640 months now on record, NASA said. This despite the fact that the seasonal temperature cycle usually tops out in July. SEE ALSO:This past July was the hottest of 1,639 months on record Last month was 0.98 degrees Celsius, or 1.76 degrees Fahrenheit, warmer than the mean August temperature for 1951-1980. It beat out August 2014, the previous record holder for warmest August, which was 0.82 degrees Celsius above average. With the continuing global heat, 2016 is almost certain to top 2015 as warmest year on record, according to Gavin Schmidt, Director of the NASA Goddard Institute for Space Studies:  https://twitter.com/ClimateOfGavin/status/775350791691534336 Scientists had expected record-shattering warmth to wane, at least temporarily, as last year's El Niño faded and a predicted cooling La Niña episode began to take hold. But La Niña hasn't arrived as predicted, and last week the Climate Prediction Center dropped its La Niña watch. Earth's global fever is manifesting itself in different ways in many locations around the globe, including in the Arctic — which is warming faster over the long run than any other region on Earth. In the next week or so, we'll know for sure just how much Arctic sea ice has shrunk this summer. In all likelihood the floating ice will set a mark for second lowest extent on record. (Stay tuned for more on that.) Last week I witnessed the impact of warming Arctic temperatures for myself when I visited Ny Ålesund on Svalbard, the northernmost permanent human settlement on the planet. The research town is at nearly 79 degrees north latitude, and sits just 764 miles from the North Pole. I was there with some of my students (I teach journalism at the University of Colorado) to do multimedia reporting on Arctic climate issues. The day before we arrived, the Kongsbreen glacier front experienced the largest calving event ever monitored, according to Kim Holmén, the International Director of the Norwegian Polar Institute, which runs a research station in the town.

A large chunk of ice (known as a 'bergy bit') about one-story high floats in the waters of Kongsfjorden in Svalbard on Tuesday, Sept. 6, 2016. This was two days after the largest calving event ever monitored from the Kongsbreen glacier front. (Photo: © Tom Yulsman) Speaking with us at the Sverdrup Research Station in Ny Ålesund, Holmén said the calving event was just one of myriad signs of a warming Arctic. "We can see changes left and right whenever we look out of the window," he said. I'll be posting more photos from our visit to the high Arctic, and perhaps a video clip or two, in the next week or so — probably when Arctic sea ice finally does reach its lowest seasonal extent. So I hope you'll check back.