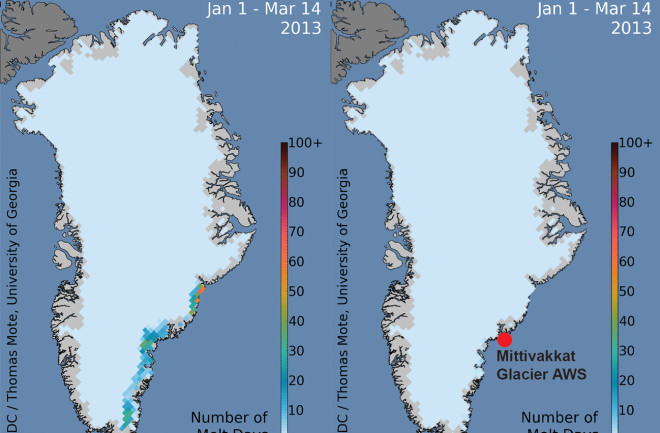 The cumulative melt extent in Greenland is shown before the correction at left, and after at right. (Source: National Snow and Ice Data Center) Back in February, satellite observations indicated that snow was melting — in the dead of winter — across large portions of Greenland's eastern coast. (I wrote about it here.) But now, it looks like the algorithm used to process data coming from the satellite was grossly over-estimating the melt. The National Snow and Ice Data Center has revised the algorithm to better estimate conditions on the ground, and the result, posted to the Greenland Ice Sheet Today web site last night, is seen above. Whereas the original estimate seemed to show upwards of 50 days of melting in some places from the first of the year until now, the revised algorithm reveals very little surface melt at all.

What happened? "Despite the fact that it has been a warm winter, it has not exceeded the freezing point nearly as often as the algorithm indicated," Ted Scambos, a research scientist with the NSIDC, told me in an email message yesterday. (Click on the thumbnail map at right to see how temperatures in Greenland have departed from the norm.) He continued:

Your article was exactly what we were thinking at that point. But later work and data showed that we had a very unusual snowpack, much warmer (and warm at depth) than previously seen. This tripped our model for melt detection. We have now re-run the model with data from 2013, and we see far less melt than before.

Something strange was happening, just not melting at the surface, Scambos says. It turns out that the intense surface melt that occurred last summer — which affected upwards of 97 percent of the Greenland Ice Sheet — left behind unusually warm snow. Heavy snowfall this winter then buried the warmer layers, according to the NSIDC. In addition, there's some indication that meltwater from the summer remains unfrozen at about 5 meters beneath the surface. All of this contributed to the spurious readings indicating extensive melting. "Fundamentally, this is still a story: very warm firn is a result of the extreme melting season from last year," Scambos says. "However, we are still awaiting the true start of the 2013 melt season (at least, for 99.9% of the island)."