Winter Postcard from Antarctica: A Green Auroral Lightning Bolt From the Blue 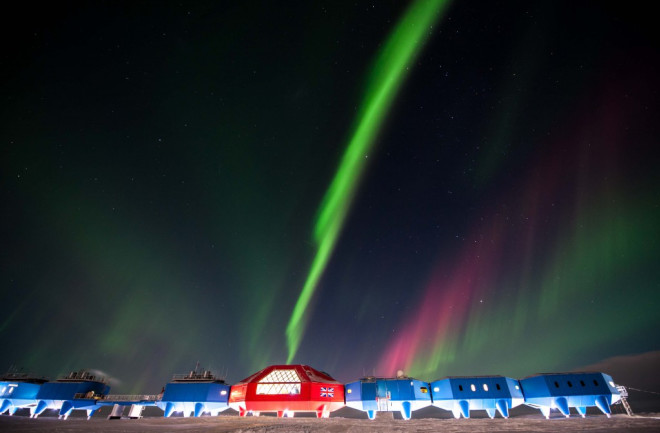 The aurora australis lights up the winter sky over the U.K.'s Halley research station. (Photograph: © Thomas Welsh) A green lightning bolt zapping a British habitation module on Mars? Well, of course not. It's actually a display of the aurora australis setting the winter sky on fire above the Halley Research Station in Antarctica. The aurora australis is the Southern Hemisphere's version of the aurora borealis. You can call them the "southern lights." The photo above is the second 'postcard from Antarctica' sent by Thomas Welsh, the station's winter manager. I posted the first one on March 26. It includes photos, a summary of some of the research that's done there, and a fascinating account of what it's like to winter over on an Antarctic ice shelf, cut off from the rest of the world. In his email to me this morning, Tom was short but sweet:

Here are some aurora photos, as promised. It was an incredible and very humbling display.

Photograph: ©Thomas Welsh Halley is the first fully re-locatable research station in the world. It consists eight modules, each sitting atop ski-fitted, hydraulic legs that can be raised to accommodate accumulating snow. A range of scientific research is conducted from the station. Here's how I summarized it in the first post:

The ice shelves fringing the southern continent play a critically important role in Antarctica’s ecological, environmental, and geophysical processes. So from a broad perspective, gaining a fuller understanding of those processes — and how they may be changing due to human influences — requires long-term research not just on the continent itself but out on the ice shelves as well.

Photograph: ©Thomas Welsh I've encouraged Thomas Welsh to keep sending me these postcards as he and his crew of 12 other people continue their winter adventure. So please stay tuned.