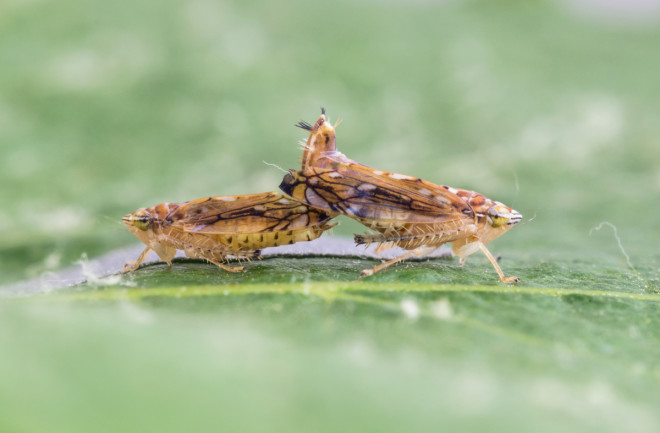 Two leafhoppers mating. (Credit: Umberto Salvagnin)For the amount of damage they can cause, leafhoppers are tiny little bastards. One invasive species, the glassy-winged sharpshooter, is only about 12mm long, but the insects are responsible for millions of dollars of damage to crops every year. They use needle-like mouthparts to vacuum up plant sap, at the same time dispersing Xylella fastidiosa, a bacteria that can spread things like phony peach disease, periwinkle wilt, and citrus variegated chlorosis. One of the most destructive plant infections is the incurable Pierce’s disease, which causes grapevines to shrivel and leads to a condition known as leaf scorch . In the U.S, Pierce’s disease does about $104 million annually in damage. Italy has a similar problem, and it’s now spreading to Britain.

But Italian scientists have found a way to control leafhoppers without using chemicals or traps—in fact, their method isn’t even lethal. Using a laser device that picks up on tiny vibrations, researchers recorded the signals that males use to sweet-talk females. Then they attached small devices to plant stems to play back the pulsing noises they captured. It’s effectively shouting over the insects, preventing males from finding mates — though the sound isn’t audible to human ears. This experiment was also successfully tested on American grapevine leafhoppers. This trick allowed the researchers to significantly silence males looking to hook up, which could help to deter their spread. It’s a clever method that could have broad implications for the agricultural industry, as more than 195,000 species of insect use vibrational signaling. The technology has emerged from a fairly new field known as biotremology, the study of vibrational communication in animals.“There are a lot of pests that are not treated with environmentally-friendly strategies just because we don't know their communication system,” says Rachele Nieri, an entomologist who worked on the project, along with two researchers from the U.S. Department of Agriculture, and Valerio Mazzoni, an agricultural entomologist at the Edmund Mach Foundation. “If we want to manipulate the behavior of a pest that doesn't use chemicals, but vibration, we need to know their communication, their language, to be able to disrupt it.”It’s not just plants that glassy-winged sharpshooters (Homalodisca vitripennis) irritate. The little bugs are also known as “pissing flies” because they spew feces everywhere, making it practically impossible to use tree shade because “vehicles parked under heavily infested trees are drenched in excrement that runs off vehicles and pools on roads and footpaths,” as one paper eloquently put it.

But as much as these suckers suck, killing sharpshooters with insecticides, currently the preferred strategy, has a lot of unintended consequences. Pesticides can mangle DNA, leading to cancer or neurological disorders, they slaughter bees, and many insects eventually develop resistance to deadly chemicals. On the other hand, if the distracting noise is at the right frequency, it would take many years for sharpshooters to evolve new mating calls, Nieri says. Of course, Nieri and her colleagues are aware that beneficial insects communicate with vibration, too. Any quivering tech needs to be studied and used with caution, or it could impact non-target species, they say. “Mating disruption is not the only way vibrations can be used in pest management,” Nieri says. “For instance, stink bugs can be attracted into traps using the female call as an attractant. To identify the best modality to use vibrations to thwart insect pests, basic research on the species-specific communication is essential.”Last year, Nieri and her colleagues took their leafhopper research out of the lab and into vineyards in Italy. The shaker prototype is called TREMOS and was awarded the Bernard Blum Award in 2017. “The test is still ongoing, so we don’t have published results yet,” Nieri says. Will solar-powered vibrators begin appearing in orchards and fields? It’s possible. Maybe we don’t need to spread noxious chemicals everywhere to protect our favorite booze-creating grapes — maybe we just need to listen to the bugs.