Will Global Warming Cause More "Medicanes"? 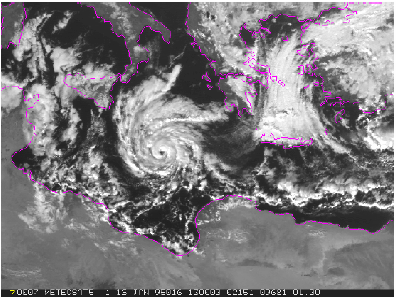 Once in a while, hurricane-like storms (like the one in this image) form in the Mediterranean Sea. These cyclones are often called "medicanes," and one scientist who's done a lot of work on what causes them to form is Storm World main personage Kerry Emanuel of MIT. In a recent study (PDF) published with a number of scientists from Spain, he writes:

Tropical-like storms on the Mediterranean Sea are occasionally observed on satellite images, often with a clear eye surrounded by an axysimmetric cloud structure. These storms sometimes attain hurricane intensity and can severely affect coastal lands..... The development of medicanes on the Mediterranean basin is quite unusual (about 15 cases in the last 20 years have been reported in the literature and in satellite images by the authors). They evolved above the Mediterranean Sea and presented strong winds and heavy precipitation. An appropriate understanding of the medicanes can help to mitigate the potentially high destructive effects of the systems on the densely inhabitated Mediterranean coast.

Later in the paper Emanuel and colleagues add that while many environmental factors affect these storms,

This provides some background for interpreting the recent news reports suggesting that global warming ought to cause more medicanes. If true, clearly this would be bad news. However, as climatologist Kevin Trenberth points out in the Times of London article linked above, it's important to bear in mind that whether or not you have hotter sea surface temperatures, there just isn't a lot of room in the Mediterranean for a cyclone to grow much in intensity before hitting something. Nevertheless--and not having yet read the Geophysical Research Letters paper that is driving the latest news coverage--I will say that it sounds plausible to me that climate change would affect the occurrence of cyclones in the Mediterranean. It's just like so many other things about the hurricane-climate relationship: We don't know a lot about the subject, but what we do know is worrisome....