Will California Be the First State to Ban the Plastic Shopping Bag? 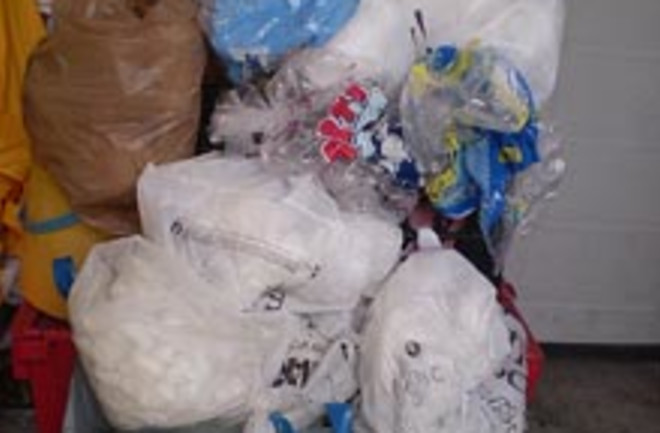 Hasta luego, plastic bags? This week the California State Assembly approved a measure to ban single-use plastic bags, and if the state's Senate approves it too, California will likely become the first of these United States to ban the bags. California governor Arnold Schwarzenegger has indicated that he supports the bill, and will sign it if it lands on his desk.

Shoppers who don't bring their own totes to a store would have to purchase paper bags made of at least 40 percent recycled material for a minimum of 5 cents or buy reusable bags under the proposal, which would take effect Jan. 1, 2012 [San Francisco Chronicle].

Convenience and drug stores, as well as small businesses, would get a little longer to switch over. The law wouldn't go into force for them until July 2013. Previously, California's fight over banning plastic bags at the state level had bogged down into a predictable back-and-forth: Green groups cited the 19 billion plastic

bags Californians use every year, most of which don't get recycled

, while plastic industry people complained that such a rule is just a tax. The breakthrough, though, came when the California Grocers Association, led by David Heylen, decided it wanted the ban.

Cities such as San Franciscoand Oakland already have bans, and 20 other California municipalities are considering similar laws. Heylen said there was a growing concern among grocery chains that a patchwork of laws would be untenable. Another important change was that the bill covered not just supermarkets but convenience stores and smaller markets [San Diego Union-Tribune].

The bill could go to the California Senate this year. Bot one thing that remains to be decided: If grocers charge more than 5 cents for a paper bag, where will the extra money go? It makes sense to offer a financial deterrent if you want people to use less plastic, as only so many people are going to buy reusable bags out of the goodness of their hearts (or to be more eco-conscious than their friends). But the San Diego Union-Tribune says

that the money isn't directed to particular recycling or other environmental programs, and grocers could charge more than the nickel per bag and pocket the difference. Related Content: DISCOVER: When Recycling Is Bad for the Environment

80beats: Plastic Is More Biodegradable Than We Thought (That's Bad)

80beats: Plastic-Devouring Bacteria Could Keep Soda Bottles Out of Landfills