Why We Need to Move Beyond Facts in the GMO Debate

Imagine if National Review, a long-established U.S. conservative publication, assigned a writer to investigate all the facts on climate change, from soup to nuts. But instead of this being a politically and ideologically-driven exercise, the writer would do it in a judicious, non-partisan, fair-minded manner. Of course, given National Review's slant on climate issues, such an endeavor is unlikely. But should it or any publication decide to challenge its own ideological biases and undertake a fact-finding mission on a controversial subject, Nathanael Johnson at Grist has provided an excellent model with his six-month foray into the GMO thicket. Recently he's distilled all that he's learned into a round-up post. The overwhelming consensus judgement of science journalists is that Johnson has done a spectacular job of sifting through all the claims and counterclaims and the technical density of a complex field of science to render clear-headed assessments. And he's done this while buffeted by the great sound and fury of the quarrelsome GMO debate. It really is an impressive feat. When Johnson started out, I was dubious, since Grist had previously covered agricultural biotechnology the way National Review covers climate change: Reflexively, selectively (always reinforcing its own assumptions about a science) and as a means to score political points. It didn't take long for Johnson to win over cynics--myself included--who thought that such a rigorous deep dive couldn't be done by an unabashedly snarky outlet with a pronounced political worldview. But Johnson pulled it off and in doing so he has performed a great service. What I wonder, though, is if his sober exploration of GMOs has made a difference with progressives and environmentalists (Grist's audience). Have these readers--many who are predisposed to believe that GMO = Frankenfoods--been moved to rethink their own assumptions and biases? Perhaps more importantly, has Johnson's dilligent work influenced anti-GMO thought leaders? Yes, I'm looking at you, Michael Pollan. It helps that Johnson is a member of good standing in the same tribe as Pollan and Grist readers. That makes him trustworthy. Still, anyone familiar with the psychology of risk perception on the GMO issue knows that even a credible messenger bearing facts will make only so much headway. It is hard, for example, to shake mental constructs that inform the way we process information. As Maria Konnikova wrote last year in the New Yorker:

Psychologists have long observed that there is a continuum in what we perceive as natural or unnatural. As the psychologist Robert Sternberg wrote in 1982, the natural is what we find more familiar, while what we consider unnatural tends to be more novel—perceptually and experientially unfamiliar—and complex, meaning that more cognitive effort is required to understand it. The natural is seen as inherently positive; the unnatural is not. And anything that involves human manipulation is considered highly unnatural—like, say, G.M.O.s, even though genetically modified food already lines the shelves at grocery stores.

Another barrier to logical consideration of facts, Konnikova noted, involves how we evaluate risks and benefits (my emphasis):

As early as 1979, the psychologist Paul Slovic, who has been studying our perceptions of risk since the nineteen-fifties, pointed out that, when it comes to new, unknown technologies, data always loses out to emotion. For instance, people judge the risks of radiation from nuclear power plants to be much higher than those from medical X-rays—a conclusion that is not backed up by the data and is at odds with the advice of most risk experts—simply because nuclear power plants seem more foreign and inspire greater dread. What’s more, when we’re in a state of heightened emotion, we don’t weigh risks and benefits equally—risks take on an outsized impact and benefits begin to pale in comparison. Once an initial opinion is formed, Slovic continues, it is very difficult to shift it with new evidence: the exact same piece of information—say, additional data on the effects of G.M.O.s on a natural ecosystem—can be interpreted in opposing ways, depending on your starting point.

All this suggests that Johnson's very earnest and rational approach to the GMO debate has limitations. So where might he go from here? Earlier this week the Wall Street Journal had an interesting article on a California-based nonprofit (called CFAR) that runs workshops for people who want to make rational-minded decisions. The objective isn't to become more like Spock, 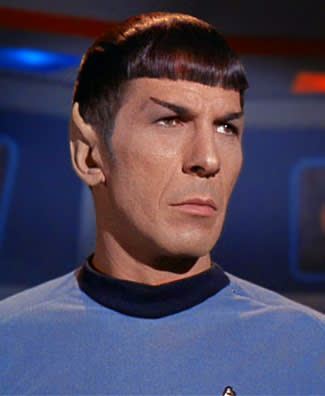 but rather, as the WSJ explained, to understand the feelings that shape our decisions:

For individuals, the odd secret of rationality is its reliance on emotions, proponents say. "People are always really surprised at how much time we spend at the workshops talking about our feelings," says CFAR President Julia Galef, who has a statistics degree from Columbia University. "Rationality isn't about getting rid of emotions, but analyzing them and taking them into consideration when making decisions," she says.

Now that Grist's Johnson has methodically worked through the pros and cons of GMOs, and what the science says about their safety and other related issues, perhaps he can delve into the science of why people, irrespective of facts, will continue to remain suspicious of genetically modified foods. Doing this will require an exploration of the emotions and mental shortcuts that influence the way we think about GMOs. If more people could grasp this, along with established facts about biotechnology, then maybe we can advance the conversation.