Why This Winter is So Crazily Warm 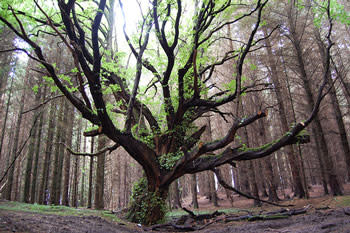 Across the US, this winter has been unusually balmy, with precious little snow, or even rain, and with trees taking the warmth as a cue to send out new leaves in January. Temperature data support those impressions: in the first week of the year, temperatures were 40 degrees F higher than average in some parts of the Midwest, Discovery News reports

, and snow cover is at 19 percent across the country, compared to an average of 50 percent at this time of year. In notoriously chilly Fargo, North Dakota, the January 4 high temperature of 55 broke the record for the warmest January day on record, and the country has seen close to no rain or snow in this first week of 2012, writes Wunderground meteorologist Jeff Masters

. "It has been remarkable to look at the radar display

day after day and see virtually no echoes," he writes, referring to the radar echoes reflected back by storms. "It is very likely that this has been the driest first week of January in U.S. recorded history." Why this freaky weather? The answer is, basically, an extremely unusual jet stream

over the last few months, Masters explains. The jet stream that defines weather in North America is controlled by the North Atlantic Oscillation and the Arctic Oscillation, climate patterns that reflect differences in sea-level pressure across certain stretches of the globe. And the pressure differences this year have been tremendous---for the North Atlantic Oscillation (NAO), this year saw the most extreme difference ever recorded in December, and the second most extreme for the Arctic Oscillation (AO). This positive pressure difference has drawn warm air from the southwest over the Eastern US, rather than the usual chilly air from the Arctic. Last winter's pressure differences were gigantic as well, but in the opposite, negative direction, so lots of cold air poured down and we had tons of snow. In fact, the last six years have been generally strange for the Arctic Oscillation, with the two most extreme negative values and two most extreme positive values on record. But why?, you ask. Why have these oscillations been so weird? Unfortunately, Masters writes, we don't really know why these variations happen. Addressing the elephant in the room---I'm looking at you, climate change---he says, "Climate models are generally too crude to make skillful predictions on how human-caused climate change may be affecting the AO, or what might happen to the AO in the future." But he notes that there are links

between solar activity and sunspots and positive values and between arctic sea ice loss and negative values. Whether this year's strong positives are related to sunspots, though, isn't clear.