Why Science Fails to Persuade

One of the big reasons why evidence-based arguments so often fail to persuade is that people turn to their own trusted sources for information. For example, I know that Vandana Shiva is peddling a load of horseshit about Indian farmers committing suicide en masse supposedly because of Monsanto and GMOs. (There's a part of me that thinks she even knows this.) But many in media and environmental advocacy circles like her and trust her, so they don't question her agenda-driven distortion of the actual facts. This drives me insane, but that's a different story. Another illustration of our biased information-gleaning process is on vivid display at the blog of Tom Chivers, a journalist with the Telegraph, a British newspaper. In a post today, Chivers describes how, on the matter of homeopathy, the expert judgement of the UK's Chief Medical Officer (who calls it "rubbish") is ignored by the government's National Health Service, which endorses homeopathic treatments. Just so we're clear: Homeopathy is rubbish and also dangerous. Now, there's a comment in the Chivers post that shows why that consensus scientific opinion is dismissed by people who believe in homeopathy (and other unproven alternative medicines).

Mmm - whose view to trust about homeopathy? Someone who has used homeopathy for years e.g. Myself, my animals, the Queen Mother, the Queen, Mahatma Gandhi, Yehudi Menuhin - the list goes on and on - or the Chief Medical Officer of England or Tom Chivers (both of whom I had not heard of until today). Don't knock it until you've tried it I say.....

Amazingly, you're going with "not the Chief Medical Officer of England", which strikes me as a bold stance to take.

But is it really that amazing and bold? Let's turn to Steven Novella at his Science-based Medicine blog:

While attending a lecture by a naturopath at my institution I had the opportunity to ask the following question: given the extreme scientific implausibility of homeopathy, and the overall negative clinical evidence, why do you continue to prescribe homeopathic remedies? The answer, as much as my question, exposed a core difference between scientific and sectarian health care providers. She said, “Because I have seen it work in my practice.” There it is. She and many other practitioners of dubious modalities are compelled by anecdotal experience while I am not. An anecdote is a story – in the context of medicine it often relates to an individual’s experience with their disease or symptoms and their efforts to treat it. People generally find anecdotes highly compelling, while scientists are deeply suspicious of anecdotes. We are fond of saying that the plural of anecdote is anecdotes, not data. Why is this? Humans are social storytelling animals – we instinctively learn by the experience of others. My friend ate that plant with the bright red berries and then became very ill – lesson: don’t eat from that plant. This is a type of heuristic, a mental shortcut that humans evolved in order to make quick and mostly accurate judgments about their environment. From an evolutionary point of view it is probably statistically advantageous just to avoid the plant with the red berries rather than conduct blinded experiments to see if it really was the plant that made your friend sick. Further, the most compelling stories are our own. When we believe we have experienced something directly, it is difficult to impossible to convince us otherwise. It’s just the way humans are hardwired.

I encourage you to read the whole post, which is very informative. This suggestion comes near the end:

Understanding the nature and role of anecdotes is vital to bridging the gap between the proponents of science-based medicine and believers in dubious or sectarian health practices (as well as the public at large). 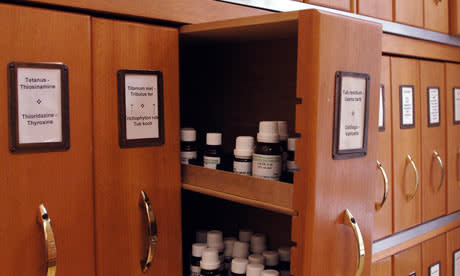 [A homeopathic pharmacy in Britain. Source/Guardian.]