Why One Zombie GMO Myth Can't Be Killed 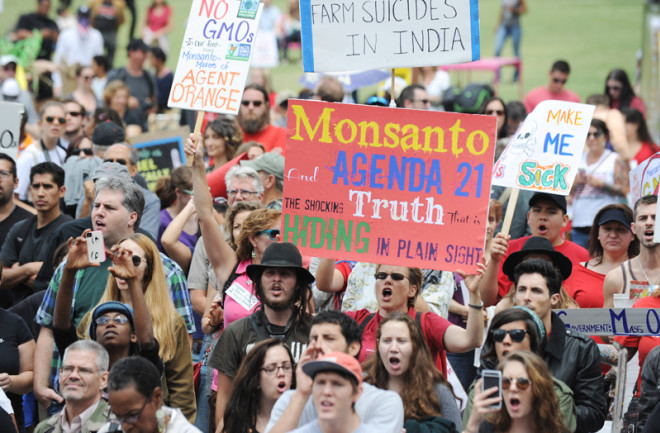 An anti-GMO protest in Los Angeles on May 25, 2013. (Photo: ROBYN BECK/AFP/Getty Images) An opinion piece in Al Jazeera repeats many of the tropes one frequently hears about GMOs. The accompanying photo (also displayed in this post) is an apt illustration. At the center is a person holding a sign that connects Monsanto and Agenda 21, which is an innocuous U.N. sustainability initiative that has been turned into a feverish conspiracy theory by the likes of Glenn Beck and embraced by Tea Party conservatives. They think Agenda 21 is part of a larger plot to install one-world government and take away individual gun and private property rights. This loony idea, which has spread to local municipalities, is evidently now part of the anti-GMO landscape. Judging by the sign in the picture, it it has been grafted onto Monsanto Derangement Syndrome. This disorder has sufferers convinced that Monsanto is out to control/poison the world's food supply. Speaking of which, to the left in the photo is a sign that equates GMOs with Agent Orange, the name given to the herbicide sprayed indiscriminately by the U.S. military over Vietnam during the 1960s and 1970s. During this time, Monsanto was one of several companies that manufactured the herbicide. The notorious legacy of Agent Orange is now commonly invoked by anti-GMO activists, who want to link the misused government spraying campaign from decades ago to Monsanto and it's biotechnology products, which actually have considerable benefits to the environment and farmers. The message at the right of the photograph has an apparent double meaning. It suggests that the sign-holder is personally disgusted by GMOs and that they are also perhaps responsible for sickening him. (Notice the familar skull and crossbone image.) There is, of course, no evidence whatsoever that genetically modified foods are harmful, but anti-GMO activists continue to willfully deny this scientific consensus, which top scientific bodies and organizations from around the world have confirmed. Lastly, note the sign at the top that reads, "Farmer suicides in India." This is another zombie myth in the anti-GMO movement--that the introduction of Monsanto's GMO cotton in India has led to the suicides of hundreds of thousands of farmers in India. It's false. I've devoted numerous posts (see here and here) to this urban legend, and am currently working on a longer article on it. Now you might say that the people who believe such things, that Monsanto is the embodiment of corporate evil and that GMOs have caused a genocide, are just a bunch of naive conspiracists. But there is a reason why these myths have gained traction and continue to build on themselves. And that is because influential voices, such as green leaders like Vandana Shiva, repeat these whoppers, often to credulous audiences. The latest instance occurred several weeks ago at the Adelaide Festival of Ideas in Australia, when Stanford's Paul Ehrlich said that "the Green Revolution led to tens of thousands of suicides in India." This is an astonishing statement, especially if you know anything about how India was truly impacted by the Green Revolution. I wasn't even sure what Ehrlich was referring to until later in the panel discussion, when he added that

Monsanto, which killed those farmers in India, has done nothing at all to feed the world. It is a center of evil.

Boom! In one swoop, Ehrlich reinforced two ridiculous yet popular tropes: That Monsanto had caused Indian farmers to kill themselves and that the company was evil. Ehrlich, like Vandana Shiva, is a respected thought leader (at least in the environmental sphere). The next time you see people holding signs at anti-GMO protests that allude to Indian farmer suicides, the next time you hear this falsehood trotted out like a war crimes indictment, you can thank the Paul Ehrlichs and Vandana Shivas of the world. UPDATE: Ehrlich on twitter, presumably after seeing my post:

That he is doubling down on an urban legend is both fascinating and depressing.