Why It's Been Snowing in the West, Even When Temps Were Above Freezing 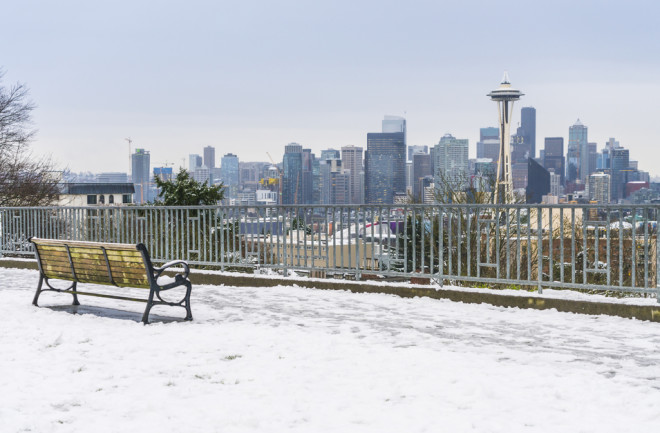 The last time Jim Murphy saw snow in Los Angeles, he was 11 years old. It was December, 1968 — a week or so before holiday break — and the already unruly class was stirred into a frenzy when one sixth grader spotted the flurries outside.

“Of course, everyone ran out of the classroom,” Murphy recalls. “The teacher had no control.”

Northridge, where Murphy grew up, is a neighborhood of Los Angeles that sits at about 800 feet above sea level. Snow is more common there than in the heart of the city, where snow hasn’t fallen in 57 years, but still only occurs once every decade or so.

Last week saw snowfall in cities across the Southwest usually known more for their scorching summers than their seasonally-appropriate precipitation. Metropolitan areas from Los Angeles to Tucson were dusted with white powder, wreaking havoc among drivers unused to wet roads. Snow fell in Pasadena, to the north-east of Los Angeles, for the first time since 1949. Tucson has now recorded two separate snow events in a season for the first time since 1990–1991. Las Vegas had its heaviest snowfall in more than a decade. But with average temperatures across the region hovering between 40 and 50 degrees Fahrenheit, how was it even possible for snow to fall?

How can it snow above freezing?

“It just requires a good blast of polar air coming down in Southern California,” explained James Murakami, the staff meteorologist at the University of California, Los Angeles. But it needs to travel mostly over land, not water, he says. “That way it warms up the least amount.”

Since water retains much more heat than land, air traveling over the ocean is generally warmer than air that has stayed over land.

This cold, dry polar air plastering the Western U.S. — distinct from the infamous “polar vortex” that recently battered the Midwestern and Eastern United States — sits relatively low in the atmosphere, underneath clouds heavy with moisture.

When precipitation falls from these wet clouds into the dry air below, it evaporates. But snowflake evaporation takes energy, which causes the air to cool even further — just like beads of sweat cool your skin on a hot summer day. Once this coolness — known as the wet bulb temperature — is at the freezing point, snowflakes will stay solid throughout their trip to the ground, even if the air temperature is above freezing.

The drier it is, the higher the air temperatures can be for snow to still occur, because more water is able to evaporate.

The storm gathered strength as it moved eastward, where it dumped nearly three feet of snow on Flagstaff, Arizona in less than 24 hours — shattering that city’s single-day snowfall record by almost 5 inches. Only a week ago, Flagstaff’s total snowfall for the season was less than a third of its average, and local business owners were worried about the financial impacts of such a dry winter.

Other weather records were smashed in the Northwest earlier this month. Seattle’s so-called “snowmageddon” prompted Washington Governor Jay Inslee to declare a state of emergency. Seattle-Tacoma International Airport was blanketed by 14.1 inches of snow over the multi-day storm. The snowfall total for the month rose to 20.2 inches just a few days later, making February 2019 one of Seattle’s snowiest recorded months. Shoppers found themselves staring at shelves emptied of bread and milk; tens of thousands of Washingtonians lost power.

Events such as these aren’t necessarily a sign of impending doom, however.

“While they’re extremely unusual,” said Murakami, “if you look far enough back in history, you could probably find a similar event.”

People tend to forget the weather of the past fairly quickly. Research out earlier this week showed that most don’t really compare current weather to any memories older than the past few years, which also means humans get used to extreme weather disturbingly fast.

As for what the future holds, Murakami couldn’t say. It’s hard for scientists to predict exactly what effects climate change will have on events that happen as infrequently as snow in the low-elevation Southwest. He did note that one predicted effect of climate change is more undulating air flow. Undulation is when the jet stream, which meanders north and south as it moves eastward across the U.S., wanders even more. It raises the possibility of more of these types of polar air excursions in the future.

But Jim Murphy, the Los Angeleno, thinks you might already be able to see the effects of a warming world in his hometown.

“Sometimes [as kids] we’d see snow on the mountains that surround the valley,” he said. “It doesn’t seem to happen as much as it used to.”