Why is the Crisis in Conservation Largely Ignored by Media?

With climate change commanding the news spotlight, dominating environmental discourse, you don't hear much anymore about biodiversity or endangered species, two interconnected issues which, until the last decade or so, had been a focus of many environmental campaigners and widespread media coverage. A case in point: In recent years, the conservation community has been at war with itself, engaged in a heated debate over how to preserve nature and biodiversity in the 21st century. The acrimonious dialogue reached a boiling point in 2014, prompting a remarkable commentary in the journal Nature, signed by more than 200 environmental scientists. Here are the passages that I figured would jump out at reporters:

what began as a healthy debate has, in our opinion, descended into vitriolic, personal battles in universities, academic conferences, research stations, conservation organizations and even the media. We believe that this situation is stifling productive discourse, inhibiting funding and halting progress. Adding to the problem, in our view, is the issue that this dispute has become dominated by only a few voices, nearly all of them men's. We see this as illustrative of the bigger issues of gender and cultural bias that also continue to hinder conservation.

When the editorial appeared in November, I was nearly done with a feature story on the conflict. That piece, entitled "The battle for the soul of conservation science," has just been published in the winter edition of Issues in Science and Technology. The rift, to a large degree, is about how to reconcile the needs of humanity and nature. 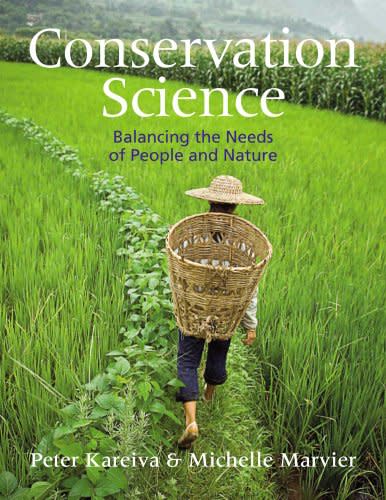 To be fair, some journalists have already written extensively about this battle. In 2012, Paul Voosen in Greenwireprofiled Peter Kareiva, chief scientist for The Nature Conservancy (TNC), and one of the main provocateurs in the debate. (See also Voosen's long 20013 feature on another ecologist, Gretchen Daily, in the Chronicle of Higher Education--called "Who is Conservation for?") Several years later, D.T. Max in The New Yorkerprofiled Kareiva's boss, Mark Tercek, the TNC president, who has steered the environmental organization into collaborative partnerships with industry. And in 2013, Hillary Rosner (a friend and award-winning journalist), wrote the most forward-looking and comprehensive piece on the different approaches to conservation that ecologists are debating. So given how this has story been percolating for a couple of years, I thought for sure the Naturecommentary (and accompanying petition) in November would spur wider media coverage. After all, hundreds of environmental scientists were calling on one another to behave and open up the discussion to more voices, particularly women. Oh, and they said that "the future of conservation science, practice and policy" was at stake. Those are pretty good news pegs. But it appears that environmental journalists mostly yawned. Imagine if a similar type of rebuke/plea had been published regarding the climate debate? The blogosphere would have exploded and you can be sure all the leading papers would have reported on it. As best as I can tell, The New Yorker is the only prominent media outlet to cover the recent developments in the conservation story. Michelle Nijhuis, another award-winning science writer, did a nice write-up for the magazine's website. Am I missing something? Why isn't the crisis in conservation a bigger story in the media? As one recent article (PDF) in the journal Frontiers in Ecology noted, "More than 80% of conservation scientists agree that current conservation goals and standards of success should be reassessed." But these scientists are deeply conflicted about how to proceed, as a fascinating discussion paper (PDF) published last year in Ecological Applications makes clear. The fraught, tumultuous debate over the future of conservation strikes me as deserving of wider public attention.