Why Chile's Massive Earthquake Could Have Been Much Worse 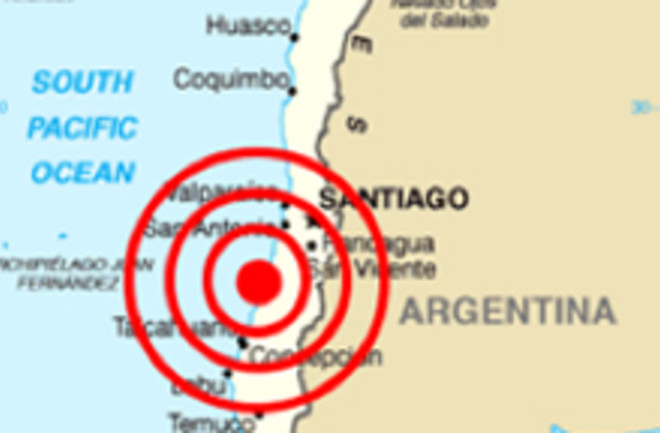 Less than two months after the earthquake that shook Haiti, and only hours after a quake causing small tsunamis occurred near Japan, the largest of 2010's seeming barrage of big seismic events hit Chile. The 8.8 earthquake is the fifth largest since 1900.

"We call them great earthquakes. Everybody else calls them horrible," said USGS geophysicist Ken Hudnut. "There's only a few in this league" [AP]

. According to seismologists, the confluence of earthquakes these last couple months are probably coincidental; they're all separated by too great a distance to be directly related. However, some say the latest quake is related to the 1960 quake in Chile that remains the largest ever recorded, a 9.5 on the Richter scale.

Both earthquakes took place along a fault zone where the Nazca tectonic plate, the section of the earth’s crust that lies under the Eastern Pacific Ocean south of the Equator, is sliding beneath another section, the South American plate [The New York Times]

. That massive event increased stress on other parts of the fault line, which continued to increase as the two plates converged at three and a half inches per year. As of this writing, the Chilean death toll has soared past 700 and led to a state of emergency in the country. But despite the fact that the quake carried hundreds of times more power than the January quake in Haiti that killed more than 200,000 people, Chile will probably see far fewer casualties. One difference, experts say, is that Chile's seismic history has caused the country to enforce stricter building codes than Haiti did.

says David Wald of the USGS. In addition, the Haitian capital of Port-au-Prince was only eight miles from the epicenter of its devastating quake. Chile's major cities were about three times further away. Luckily, people in the Pacific were also spared a deadly tsunami, which are common with this kind of quake. Unlike the Haiti episode, which was caused by a laterally moving slip-strike fault, Chile's was a thrust-fault quake, says seismologist David Schwartz, noting that the vertical motion produced by thrust-fault quakes often produces tsunamis.

“When they slip, the fault that causes the earthquake breaks the surface, and pushes the water up,” he said. “It pushes an awful lot of water. And that water has to go somewhere” [The New York Times]

. It's still not entirely clear why this quake only generated modest tsunamis--researchers measured a 4-foot water rise in Japan, waves 6.5 feet higher than usual in Tonga, and tsunamis of only 3 feet in Hawaii, where authorities evacuated coastal populations as a precaution. Geophysicist Emile Okal

speculates that part of the reason may be that the tsunami was generated in a relatively shallow part of the Pacific off Chile. "Locally this doesn’t change anything," he said. "But as the tsunami propagates into the really deep water of the Pacific Basin, [the shallower origin] does decrease its amplitude somewhat" [National Geographic News].