Who shall inherit the earth?

There was a question below in regards to the high fertility of some extreme (“ultra”) religious groups, in particular Haredi Jews. The commenter correctly points out that these Jews utilize the Western welfare system to support large families. This is not limited to just Haredi Jews. The reason Somalis and Arabs have fertility ~3.5 in Helsinki, as opposed to ~1.5 as is the norm, is in part to due to the combination of pro-natalist subcultural norms, and a generous benefits state. Of course we mustn’t overemphasize economics. Israel’s decline in Arab Muslim fertility but rise in Jewish fertility in the 2000s has been hypothesized to be due to different responses to reductions in child subsidies by Muslims and the Haredi Jews. In short, the former reacted much more strongly to economic disincentives in relation to the latter.

A bigger question is whether exponential growth driven by ideology can continue indefinitely. I doubt it. Demographics is inevitable, but subject to a lot of qualifications. Haredi political power in Israel grants some benefits, but at the end of the day basic economics will serve as a check on the growth of the population of this sector. Similarly, barring massive productivity gains we’ll see some structural changes to the provision of government services across the aging developed world.

Below are some fertility numbers from the GSS. You see the median number of children for non-Hispanic whites born before 1960 from the year 2000 and later. I’ve compared the demographics of fundamentalists, non-fundamentalists, and those who are skeptical of the revealed nature of the Bible. 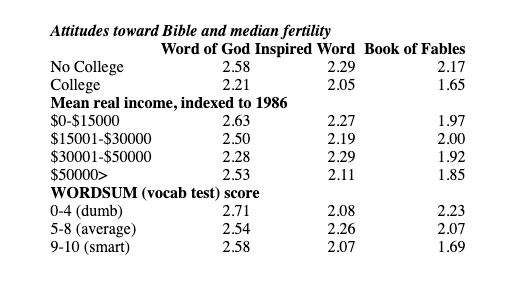 These data imply to me that the secular are getting idiocratic faster than the fundamentalists.