While Rest of Globe Basked, U.S. Mostly Shivered in March

NOAA's national climate overview for March. (Source: NOAA National Climatic Data Center) The globe overall might have been quite warm in March, but here in the United States the picture was quite different. Following yesterday's release by NASA of data showing that this past March was the fourth warmest globally in 134 years of record-keeping, the National Oceanic and Atmospheric Administration today announced that the United States experienced its 43rd coldest March in a record stretching back to 1895. But that's just part of the U.S. climatic story for March. The map above summarizes the most significant events. The cold average March temperature for the United States as a whole was driven by relatively frigid conditions in the Midwest and the Northeast, where nine states had temperatures that ranked among their 10 coldest on record, according to NOAA. But while more than half of the country shivered, and two-thirds of the Great Lakes were still frozen even as late as early April, areas west of the Rockies mostly experienced warmer than normal temperatures. California, for example, experienced its ninth warmest March. Even so, the month of March was mostly defined by cold. No state experienced record warmth. And there were "five times as many record cold daily maximum and minimum temperatures (5,822) as record warm daily maximum and minimum temperatures (1,149)," according to NOAA's report. 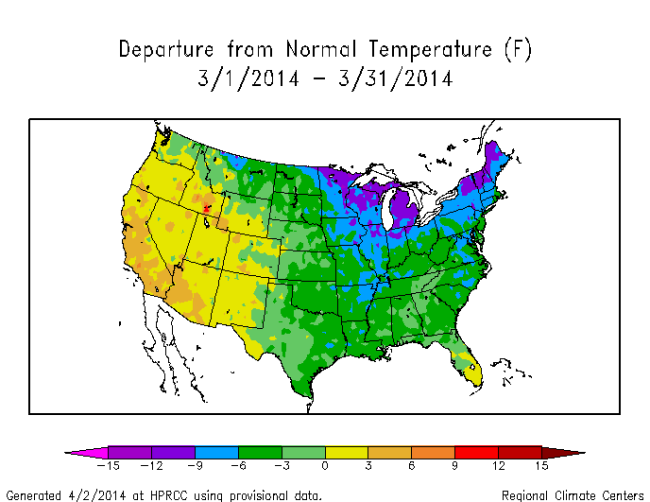 East of the Rockies, the lower 48 states of the U.S. were colder than normal, with particularly frigid conditions in the Great Lakes region. Meanwhile, the West was warm. (Source: National Climatic Data Center) Given the wintry conditions across the eastern half of the continental United States, it should be no surprise that snow cover was above average. From the NOAA report:

March snow cover extent across the contiguous U.S. was the 22^nd largest in the 48-year period of record at 845,000 square miles, about 104,000 square miles above the 1981-2010 average. Above-average snow cover was observed across the Northern Plains and Rockies, Midwest and Northeast where numerous storms brought heavy snowfall during the month. Below-average snow cover was observed for most of the West and southern Rockies due to season-long snow deficits.

A little more than 38 percent of the contiguous U.S. was in drought at the end of the month, about a 10 percent increase from the beginning of the month. Storms that brought snowfall to the mountains of California did little to improve severe drought conditions in the state. Why was the United States relatively cold while the globe overall experienced a particularly warm March?

The blue area shows a stronger than normal trough of low pressure. (Source: NOAA) A trough of low pressure persisted over eastern Canada and extended to the northeastern United States and western Canada. This allowed frigid northerly masses of air to spill into the United States east of the Rockies and all the way to the Gulf of Mexico. Meanwhile, areas of high pressure persisted over Alaska and much of the western United States, keeping those regions abnormally warm. This pattern seems to be connected to the jet stream and interactions between the atmosphere and ocean over the North Pacific Ocean, according to NOAA. Globally, the warm average temperature for March was driven in large measure by a sea of extraordinary warmth that stretched from Europe across Russia and all the way to the western United States.