In the comments below there was a question as to political party consistency over the decades in terms of voting by state. A quick correct impression is that the Democratic South shifted toward Republican, while New England went the opposite direction. In contrast much of the Midwest remained Republican over the whole period. How does this comport with the quantitative data?

I went about this in a relatively straightforward manner. First, I computed the national average Democratic vote in presidential years since 1912 (excluding Alaska, Hawaii, and D.C.) using the states as input values (so this would differ from the popular vote percentages, as low population states would have the same weight as high population states). Second, I then converted the state results into standard deviation units. Then, I computed the standard deviation of these values. So, for example, Mississippi tended to have larger positive values in the first half of the 20th century (voted more Democratic than the nation as a whole), but shifted toward negative in the later 20th century (less Democratic than the nation as a whole). Because of this shift Mississippi had a high standard deviation over the years, since its national position was highly dispersed over time. In contrast, New Mexico was much closer to the national mean over time.

And also a chart of the top nine most volatile states over the past 100 years. 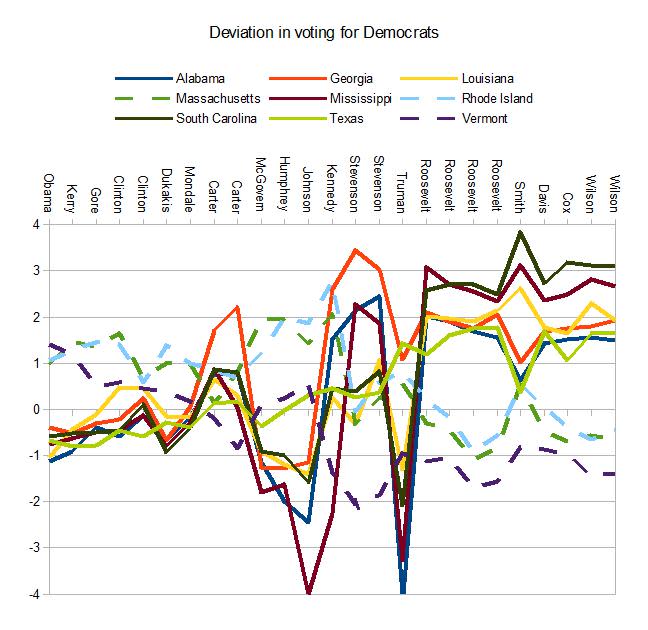 To focus on the states which have been consistently Republican here's mean Democrat vote vs. the deviation. As you notice, nothing's the matter with Kansas! 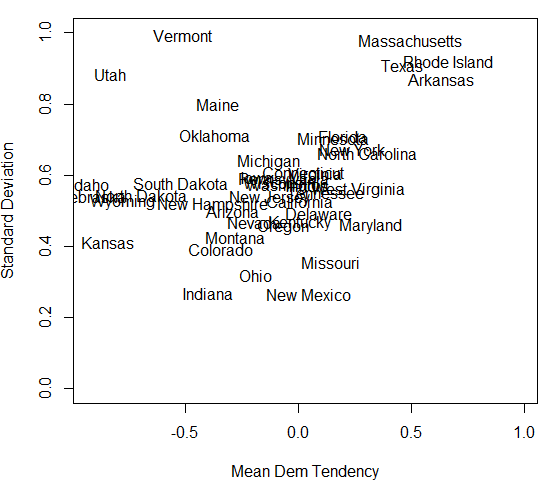 Here's a spreadsheet with the data and computations.

MindCan't Get a Certain Song Out of Your Head? Here’s What Makes It an Earworm
Recommendations From Our Store