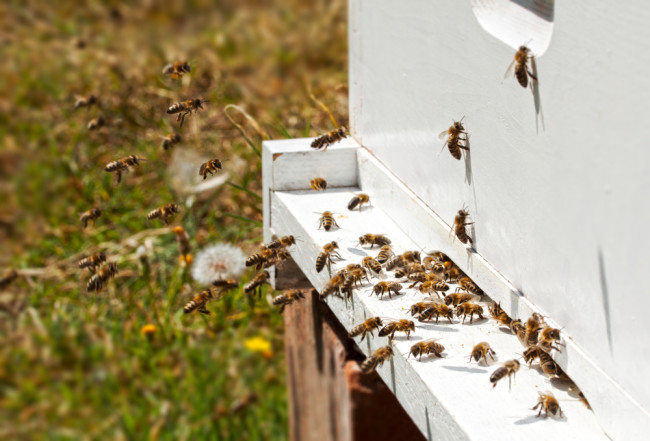 Bees are dying all over the world, and nobody is sure why it is happening. Up to 40 percent of U.S. beekeeper hives failed to survive the past winter, making this the worst season so far on record. In part this was the result of a mysterious and growing phenomenon called Colony Collapse Disorder (CCD) in which bees fly off en masse and never return to their hive.

Agricultural production is beginning to take a hit from the loss of bees. In California’s Central Valley at the end of February, there weren’t enough commercially bred bees to pollinate all of the 800,000 acres of almond trees. Some desperate almond farmers actually flew in the precious insects from Australia to service their trees. Almonds aside, fully one out of every three bites of food that we eat were produced with the help of insect pollinators. Domestic bees aren’t the only ones in trouble. Wild pollinators have been diminishing too. Feral honey bee populations in the U.S. have dropped an alarming 90 percent in the last 50 years. Some species are teetering on the edge of extinction. Fifteen pollinators are listed as endangered in the U.S. alone. The World Conservation Union forecasts that, largely as a result of global declines in wild pollinators, over 20,000 flowering plant species are likely to disappear

over the next few decades. While some food crops like almonds depend on commercially bred bees, others use primarily wild insects to pollinate them. A study

published in the journal Science in March concluded that wild pollinators are equally if not more important than domestic honey bees. The continued loss of feral pollinators, the researchers warn, could spark a crisis in our agricultural system from which it would be difficult to recover. Pollinators, moreover, are considered indicator species for the overall health of the environment. When domesticated bees and their wild cousins fare poorly, it is a sign that all is not well in the natural world.

But scientists are finding it hard to pinpoint which factors in particular are the most responsible for the rise in pollinator mortality. That’s because a lot of different things have gone wrong lately. For one thing, wild habitats such as meadows and grasslands that the pollinators depend on for a varied diet are shrinking, as urban sprawl and the spread of monoculture agriculture encroaches upon them. The introduction of non-native species has also reduced the numbers of native pollinators in the U.S. and elsewhere. The European honey bee, which is the one that commercial beekeepers raise, is actually an invasive species which is competing with American insects for limited resources. In some areas, moreover, there is evidence that erratic weather and shifts in rainfall patterns due to climate change may already be a factor in the decline of certain species. Something else that has been getting a lot of attention, especially in Europe, is the impact of agro-chemicals on both wild and domesticated bees. In a landmark move late last month, the European Union imposed a provisional two year ban on the use of the most common class of pesticides in the world, the neonicotinoids (neonics for short). A growing body of research now shows that the neonics, a chemical relative of nicotine which acts as a nerve poison in insects, harm bees by disrupting the navigational ability which they use to find flowers and make their way back to the hive. In one of the most widely publicized studies

, scientists at Harvard were actually able to duplicate the symptoms of CCD by exposing bees over a 23 week period to a low dose of imidacloprid, a neonic which is produced by the German company Bayer AG. Another report

published in PLOS One found “remarkably high” levels of neonics and other agro-chemical toxins in pollen collected by honeybees, leading, the researchers said, to significant reductions in overall honey bee fitness. Yet another study conducted by Jeffrey Pettis, the head of the US Department of Agriculture's Bee Research Laboratory, concluded

that exposure to the neonic imidaclopid (the most popular pesticide in the world) makes bees more susceptible to infection by a variety of common pathogens.

Only part of the problem

While these chemicals clearly hurt bees, most researchers believe that insecticides are only a part of the problem. The spread of the blood-sucking bee parasite the Varroa mite may also be weakening bees and making them more prone to CCD. Another suspect is the Bt (Bacillus thuringiensis) toxin in the pollen of genetically modified corn, which German scientists found

compromised bee immune systems. And certain practices of commercial beekeepers could be contributing to the collapse of their own hives as well. A study published in the Proceedings of the National Academy of Sciences last month suggests that the high-fructose corn syrup that bees are fed lacks critical elements

which help bees fight off the ill effects of environmental toxins, like the neonics, as well as pathogens. The entomologists from the University of Illinois said that this nutritionally bereft equivalent of junk food deprives bees of the enzyme p-coumaric found in their own honey, which is crucial in the regulation of their immune systems. The U.S. Department of Agriculture issued a report

[pdf] last Thursday which points to a "complex set of stressors and pathogens," including agro-chemicals, as likely suspects in recent bee die-offs. But it stopped short of making any specific policy recommendations. The Environmental Protection Agency says that it is currently reviewing the situation and will come out with its own recommendations in 2018. This seemingly casual approach led commercial beekeeper Larry Pender to comment, "I can't wait for the regulators to take their time, because we need these bees now." He told CBS News

that he lost a half million dollars last year alone, and had to lay off five of his seven workers. Beekeepers like Pender are clearly hurting. But with so much of our human food supply on the line, the stakes could not be higher for the rest of us as well.

Richard Schiffman is an environmental journalist, poet and author of two books based in New York City. You can read more of his work here.