What to Do With Troublesome Invasive Species: 1) Eat Them, 2) Wear Them 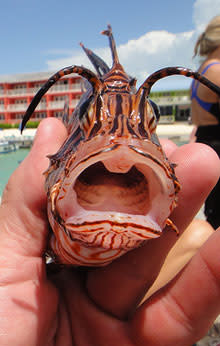 Sick of invasive snakes eating through your wiring and biting your babies? Don't have any tylenol-doped mice to lob at them? You might be in luck, we have a few ideas of what to invasive species that insist on making pests of themselves. Idea #1: Make Them Into Dinner Become a part of the "invasivore" movement by ingesting some tasty lionfish (pictured) or asian carp, and by nomming on some kudzu or Japanese knotweed. One "almost serious" invasivore, Rachel Kesel, blogged on the subject and talked to The New York Times:

She said in an interview that she was studying in London when she wrote the post, which grew out of conversations about diet and ecology. “If you really want to get down on conservation you should eat weeds,” she decided. And so she blogged. She now works for the parks department of San Francisco and said she did indeed pursue the vegetable side of the diet she proposed. “I’m really looking forward to some of our spring weeds here,” she said, notably Brassica rapa, also known as field mustard or turnip mustard.

“When human beings decide that something tastes good, we can take them down pretty quickly,” he said. Our taste for passenger pigeon wiped that species out, he said. What if we developed a similar taste for starlings?

If you're in Florida, Chowhound has some good tips on cooking python

to help deal with that invasive water rat. Idea #2: Make Them Into Shoes (or Other Clothes) 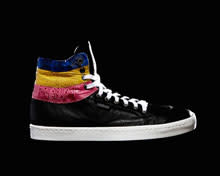 Not interested in chowing down on your local invasive cane toad? Gideon Shoes

has you(r feet) covered. They are harvesting, tanning, and dying the hides of these poisonous Australian pests and pairing them with the hide of a too-plentiful native, the kangaroo, to construct handmade and fashionable sneakers. Getting your hands on a pair will set you back a chunk, since prices go up to $545 a pair. The money goes to the Ted Noffs Foundation, who provides drug and crisis centers for at-risk youth in Sydney. Foundation spokesperson explained the eco-drive to ABC News

"We were looking at using materials that were going to be more biodegradable and so we started looking at things which were better for the environment, such as [kanga]roo over bovine," Matt Noffs from the foundation said. "And then someone said you can actually get cane toad, and I thought, well, that would be really interesting."

. We'll have to think of something else to do with these sneaky alien invaders.

In the Northeast, neophyte invasivores face some unappetizing possibilities, like the zebra mussel (too little meat and too much salmonella) and the unpleasant and unwanted freshwater algae, Didymosphenia geminata, commonly called didymo, or, with absolutely no trace of affection, rock snot. I don’t see the beginning of a menu there.

(photo gallery) Discoblog: How to Get Rid of Invasive Tree Snakes: Bomb Them With Parachuted, Poisonous Mice