What Stands Between You and the World's Most Expensive Burger 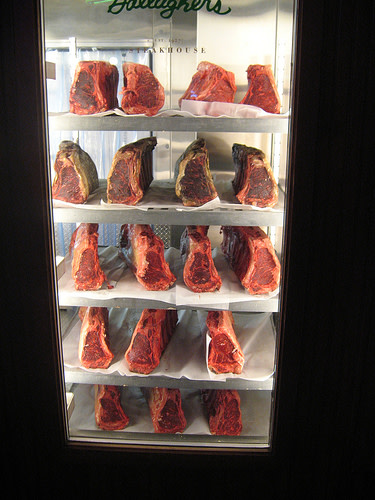 You can dream, but...lab-grown processed meats, let alone steak, are a very long way off still.

) is your gag reflex: the pale strips of cultured muscle cells that are currently the top contender for Petri-dish burgerdom look like scraps of mold, and they must be "exercised"---stretched between Velcro tabs---to strengthen and gain meat-ish texture. A patty made from them will be a hand-assembled stack of about 3,000 scraps, and in order to give the stuff color and iron, the lead scientist of the project opined to Reuters

, they might need to soak it in lab-grown blood. Gah. Still, factory farming ain't pretty either

, and the sheer amount of land and other resources we dedicate to meat production

can be enough to make you gag as well. This particular cultured meat project---there are many

---hopes to have its first proof-of-concept burger made by August or September next year. But there is a long way to go before this stuff has even a chance of hitting the mainstream, especially since, on top of the gross-out factor, this patty will run, oh, about $345,000. As John Timmer of Ars Technica explores in a post

that jumps off from the Reuters feature

, even though a real, for-sale cultured meat patty would obviously have to be much cheaper than that to compete with meat, the fact that it takes that much effort and money to make the first one isn't terribly encouraging. Anyone who has read about efforts

from stem cells will know what he means: "Getting any cells to grow into mature tissues is ferociously expensive," he writes, "and adding additional cell types [as would be required for texture and taste] will increase the complexity and cost." For a new urethra

for an injured child, OK. But for McDonald's? A lot of things that are still in the realm of basic science will have to change first.