What caused this colossal heart-shaped hole in the cloud deck off the coast of California and Baja? 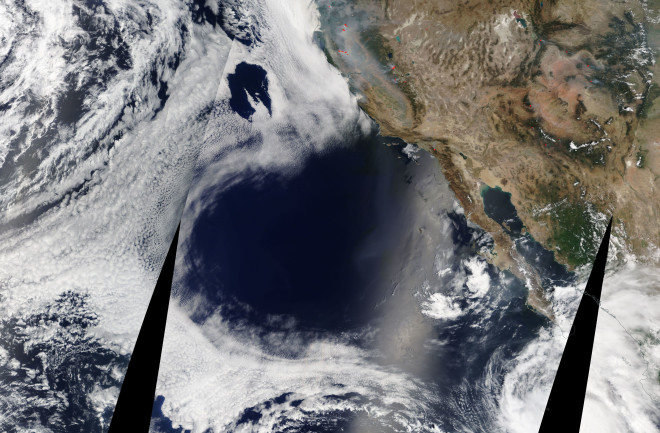 NASA's Terra satellite spied this heart-shaped hole in the cloud deck over the Pacific on August 7, 2018. (Source: NASA Worldview) I'm always on the look out for interesting images of Earth shot from space so that I can share them here at ImaGeo. And when I saw the one above, I just couldn't resist it.

Source: NASA Worldview Often, the cloud deck extends along the coast of California and down into Baja in a more or less continuous manner, as you can see in the image at right acquired by NASA's Terra satellite five years ago in August. But in the Terra image above, there is indeed a massive heart-shaped hole in the deck. It's also visible in images from Terra's twin, the Aqua satellite, along with a swath of smoke from California wildfires. You can see that here. I knew that waters off Southern California were very warm. Record warm in at least one place, in fact, as described in a story posted at NASA's Earth Observatory:

On August 1, 2018, researchers from the Scripps Institution of Oceanography observed water temperatures of 25.9 degrees Celsius (78.6 degrees Fahrenheit) along the coast at La Jolla, exceeding the previous record of 25.8°C (78.4°F) set in 1931.

The incredibly warm water extended far beyond La Jolla, according to NASA — which posted this graphic showing just how far above average the water temperatures were:

Sea surface temperature anomalies on August 2, 2018, as compiled by NOAA’s Coral Reef Watch, which blends observations from satellites with the output from computer models. (Source: NASA Earth Observatory) I also learned from NASA's story that these exceedingly warm sea surface temperatures were driven primarily by a massive area of high atmospheric pressure that had persisted over the western United States for weeks. That same high pressure system had sent air temperatures soaring, contributing to the plague of wildfires in California and Oregon. I thought there had to be a connection to the hole in the cloud deck (which persisted for several days, by the way). So to connect the dots, I got in touch with Bill Patzert, a retired NASA climatologist. Here's what I wrote in my email:

I saw that NASA’s Earth Observatory quoted you in their piece about record high SSTs off Southern California. Hey, I thought you had retired! ;-)

But seriously, I noticed the large hole in the cloud deck off the coast visible in the image below acquired by the Aqua satellite yesterday (Aug. 7). I'm wondering whether this might be connected to the high sea surface temperatures in the same area, and if so, what the specific mechanism would be. Any thoughts?

As it turns out, there was a connection. As Patzert put it in his reply:

Great image. My simple explanation is this is part of the huge high pressure system that has been plaguing the Southwest and West for the past month or more. It is not only over the continent, but extends out over the Pacific. High pressure gives sinking air, equals little to no cloudiness. Look at the clouds surrounding 'the hole'; you can visualize the clockwise (anticyclonic) flow surrounding it.

I actually checked satellite imagery acquired over a few days to look for that clockwise flow — which is associated with high pressure systems — and sure enough, there it was.

But what about the heart shape? How would sinking air in a region of high atmospheric pressure cause that? I'll leave that for you to ponder!