What Caused the Cold at Ice Bowl II?

Clouds streaming across Lake Superior are indicative of lake effect snow. This animation of two satellite images consists of a natural-color image of the lake and a false-color image in which red and orange tones show snow on the ground. (Images: NASA. Animated GIF: Tom Yulsman) As I'm writing this post, I'm watching the Green Bay Packers-San Francisco 49ers game, and the temperature at Lambeau Field is 5 degrees F, with a wind chill of about -12. Not quite Ice Bowl territory, but getting there. And the field sure does look like the frozen tundra... To the north and west, a frigid wind straight from the Arctic has been blowing across Lake Superior, creating long streamers of lake effect snow. You can see them in the animation of images from NASA's Terra satellite above, captured this afternoon. The image that looks like it was snapped on black and white film is actually in true color. The other image shows the scene in false color, with red and orange tones indicative of snow on the ground. Green Bay, Wisconsin is just to the south, out of the frame. And just in case you're interested, I am most definitely a Packers fan, thanks to my days living in the wonderful city of Milwaukee back in the '90s. Unfortunately (from my perspective), the Niners lead 13-10 at the beginning of the second half. I have faith that this will change by the time I finish writing... But I digress. This post isn't about the football game per se (although I'll be coming back to it in just a bit). It's about winter and the mind-boggling cold. In case you're living in, oh, I don't, maybe Fairbanks, Alaska — where it is an absolutely balmy 17 degrees F as I write this — much of the United States is seeing some of the nastiest winter weather in a very long time. Here's how the National Weather Service is describing it:

The coldest temperatures in almost two decades will spread into the northern and central U.S. today behind an arctic cold front. Combined with gusty winds, these temperatures will result in life-threatening wind chill values as low as 60 degrees below zero. Also, heavy snow will develop from the eastern Plains to the Great Lakes today, with up to a foot of accumulation possible.

The unusual cold is the result of a phenomenon called the polar vortex. Usually, it keeps cold air bottled up over the Arctic. But sometimes the vortex breaks into pieces. That's what's happening right now, and one of the fragments — a very big chunk indeed — has shifted south, bringing the Arctic with it. (For a detailed explanation of the conditions that set up this cold outbreak, see this post from my colleague Andrew Freedman at Climate Central. And for more detail about the polar vortex, see this post at NASA Earth Observatory.) 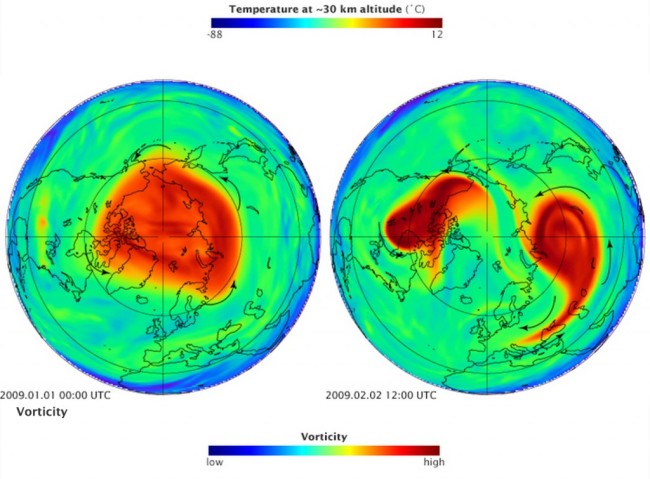 The polar vortex on January 10, 2009 to the left, and Feb. 2, 2009 to the right. (Source: NASA Earth Observatory) The images above illustrate this phenomenon. They show the vortex in the winter of 2009 — specifically a property called vorticity, with the red showing the highest values. The red color also is indicative of the coldest temperatures. In January, strong winds rushing counterclockwise around the Arctic kept cold air bottled up. Then in February, the vortex split in two, and one portion slipped to the south over North America, bringing bone-chilling cold with it. That's not unlike what's happening now. There is some reason to believe that climate change could be playing a role in weakening the polar vortex. But it's also something that nature can do all by herself. In fact, that's exactly what she did back in 1967 — during the now legendary Ice Bowl, in which the Green Bay Packers beat the Dallas Cowboys 21-17 at Lambeau for the NFL Championship. As I write this... HOLD ON! JOHN KUHN HAS JUST RUN ONE FOR A TOUCHDOWN AND THE PACK IS BACK!... Okay, I digressed again... The 1967 game still stands as the coldest National Football League game ever played. (The temperature at Lambeau right now is still not below zero.) Here's what the weather map looked like a few days earlier: 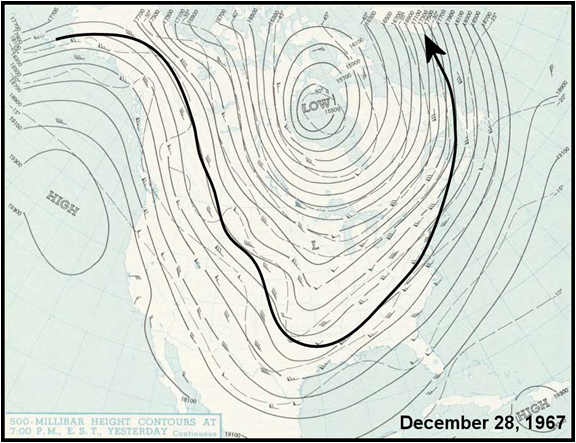 The weather pattern on Dec. 28, 1967, three days before the Ice Bowl. (Source: NOAA) And here's what it looks like right now:

Source: National Weather Service I don't know about you, but to my eye they look very similar. If you're interested in more detail about the conditions that led to the first Ice Bowl check out this page from NOAA. Alright! Enough weather geekery for now. I've got a game to watch, and the damn 49ers have just scored, making it 20 to 17 in the fourth quarter. But the Pack is coming back — again. What do they know about cold in San Francisco? And wait. HOLD ON... FIELD GOAL PACKERS! TIED AT 20!... Epilogue: San Francisco wins on a field goal with three seconds to go. DAMN!