Whale's Life Story is Written in Layers of Earwax 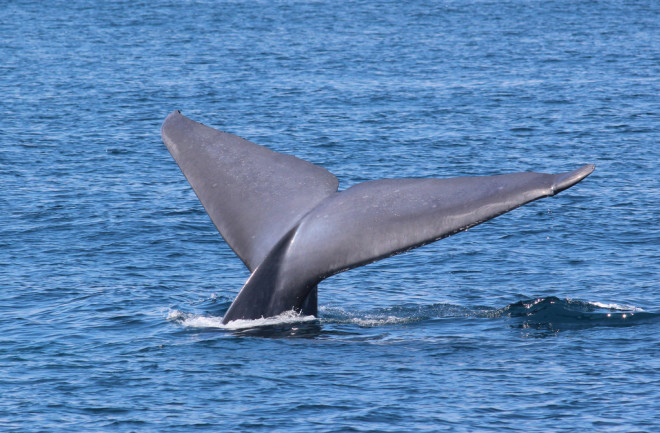 Blue whales like this one accumulate informative earwax plugs. Image credit: tombenson76/Flickr Do you know how big a Q-tip would have to be to clean out a whale's ear? Certainly too unwieldy for practical use, which is probably why whales don't clean their ears. And researchers celebrated this fact when they realized that the solidified and smelly earwax from a blue whale could tell a detailed history of its life and the oceans where it swam. Marine biologist Stephen Trumble told NBC News,

"It might be the only life history of any free-ranging animal...It's keeping a journal."

Earwax builds up in a whale like rings in a tree, correlated with their 6-month periods of feasting and fasting. Researchers can thus calculate a whale's age by doubling the number of layers in its earplug. But there's more. The wax also accumulates chemicals, including hormones from inside the whale's body, and chemicals in the water around it.

This stinking wad of earwax is helping researchers understand the persistence of pollutants in the ocean and its inhabitants. Image credit: Trumble et al., PNAS Researchers discovered this timeline of chemical exposure by analyzing the 10-inch earplug of a 12-year-old blue whale that died after a boat accident off the coast of California. Testosterone levels helped researchers pinpoint when puberty hit, and cortisol peaks indicated the stress of snagging a mate. The blue whale encountered his fair share of pollutants, too, including mercury, DDT, flame retardants and over a dozen other persistent organic pollutants. Many of these chemicals have long since been banned, but the earplug shows they are still in the water and accumulating in animals, especially when baby whales are in the womb or nursing." Sascha Usenko, one of the researchers, told NPR,

"It's been 30-plus years since we've stopped using [DDT], but to still see it showing up at such high concentrations — one of the dominant chemicals we see — was surprising."

In addition to shedding much-needed light on the elusive life history of blue whales, the study, published in Proceedings of the National Academy of Sciences this week, suggests the whale could also act as a canary for environmental conditions in the vast and unknowable oceans. Now the researchers just need to expand their earwax collection.