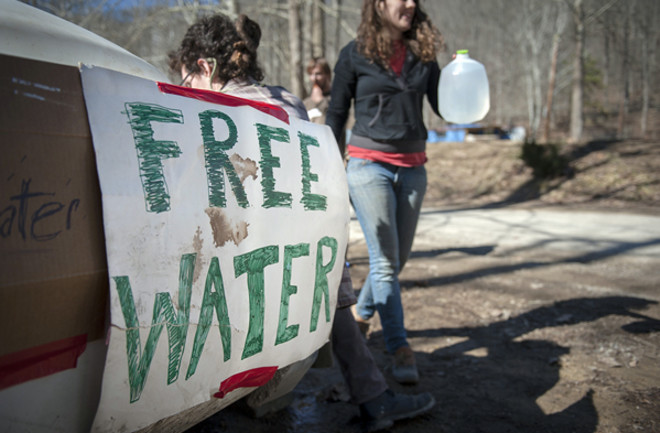 Area residents had to rely on bottled water for weeks. | James Fassinger/Corbis

Sign up for our email newsletter for the latest science news
Crude MCHM contaminated the Elk River in Charleston, W.Va., in January, after a storage tank ruptured at Freedom Industries. | Tyler Evert/Associated Press/Corbis

Before 10,000 gallons of an obscure coal-processing chemical spilled into the Elk River near Charleston, W.Va., in January and contaminated water supplies for more than 300,000 residents, few people knew crude MCHM existed. The chemical isn’t listed in the EPA’s public database of toxic chemicals, and it’s not federally regulated. Suddenly, the licorice-pungent compound was in the spotlight as the star of one of the worst water contamination episodes in U.S. history. But whether new safety measures for crude MCHM — and thousands of other unregulated industrial chemicals — will now take center stage remains unclear.

Many rallied at the state Capitol to demand safety measures. | John Raby/Associated Press/Corbis

Crude MCHM, or 4-methylcyclohexane methanol, is used to purge impurities so coal burns more cleanly. But the cleaner itself is not so clean. As the compound flowed from a ruptured storage tank and its cracked containment pond at Freedom Industries’ Etowah River Terminal — just 1.5 miles upstream from a drinking-water intake — hundreds of Charleston residents crowded hospital emergency rooms reporting nausea and other ailments.

At first, the Centers for Disease Control and Prevention said the contaminant posed little risk to public health, because concentrations of crude MCHM were measured at less than 1 part per million. But six days later, officials changed course, warning that pregnant women, children and other vulnerable residents should keep the taps turned off.

The confusion exposed a long-standing blind spot in U.S. environmental policy: Thousands of industrial chemicals lack sufficient health and safety information. That’s because of a loophole in the 1976 Toxic Substances Control Act, which exempted chemicals already in use when Congress passed the law. At the time, officials presumed they were safe.

Area residents had to rely on bottled water for weeks. | James Fassinger/Corbis

“This particular chemical is an example of tens of thousands of chemicals that are widely in commerce, but for which we know very little about their toxicology,” says epidemiologist Lynn Goldman, who headed the EPA’s toxic chemicals division in the 1990s and is now dean of public health at George Washington University. As the chemical snaked through Charleston’s water pipes, the CDC tracked down a single MCHM study, conducted by Eastman Kodak in 1990 to assess the risk to workers.

But the study, performed on rats, only examined short-term risks such as skin or eye irritation, Goldman notes. It wasn’t designed to consider effects on public health.

While the cleanup continues, public concern lingers. Four months after the spill, about two-thirds of residents said they still weren’t drinking from the tap, according to a local health department survey.