West Africa Is Prone to "Mega-Droughts," But People Aren't Prepared 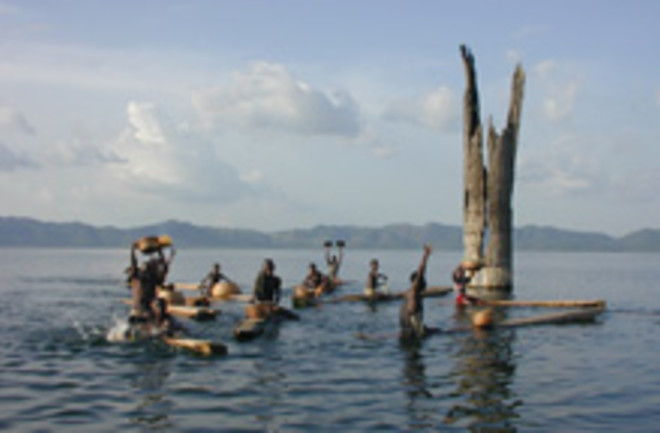 West Africa has a history of severe, prolonged "mega-droughts," according to a new study, and researchers say that another one is inevitable, although they can't say when it might occur. Says lead researcher Tim Shanahan:

"It's disconcerting - it suggests we're vulnerable to a longer-lasting drought than we've seen in our lifetime.... If the region were to shift into one of these droughts it would be very difficult for people to adapt; and we need to develop an adaptation policy" [BBC News].

The study, which examined sediment samples on a lake bottom to trace the climate history back 3,000 years, reveals that the

infamous 1970s drought of the African Sahel region, which lasted several decades and killed more than 100,000 people, was actually a "minor" event.... "What's disconcerting about this record is that it suggests the most recent drought was relatively minor in the context of the West African drought history" [New Scientist]

, says Shanahan. The researchers found that decades-long droughts similar to the 1970s event occur every 30 to 60 years, but that even more severe, century-long droughts have reoccurred as well. The most recent mega-drought began in 1400 and lasted until 1750, during which time forests grew up in dry lake beds. For the study, published in Science, researchers scooped sediment samples from Lake Bosumtwi in Ghana. The lake is a basin formed in an ancient meteorite crater and the water level is therefore very dependent on rainfall, and isotopes in the sediment laid down each year provide information about that year's rain. Researchers say the shorter droughts

appear to be linked to the Atlantic Multidecadal Oscillation (AMO), a natural climatic cycle in which sea surface temperatures in the tropical Atlantic Ocean vary over time.... However, the cause of the longer, multi-century droughts is not clear. "That's one of the scary aspects - we have no idea what causes them," said [study coauthor] Jonathan Overpeck [BBC News].

The researchers warned that global warming may make droughts in the Sahel even more severe, and say the study provides yet another argument for taking decisive action to curb greenhouse gas emissions.

But Reindert Haarsma, a meteorologist at the Royal Netherlands Meteorological Institute, points out that there is still disagreement among climate scientists on whether the Sahel will become wetter or drier with climate change. African weather is among the least studied globally, so forecasts are extremely uncertain [New Scientist].