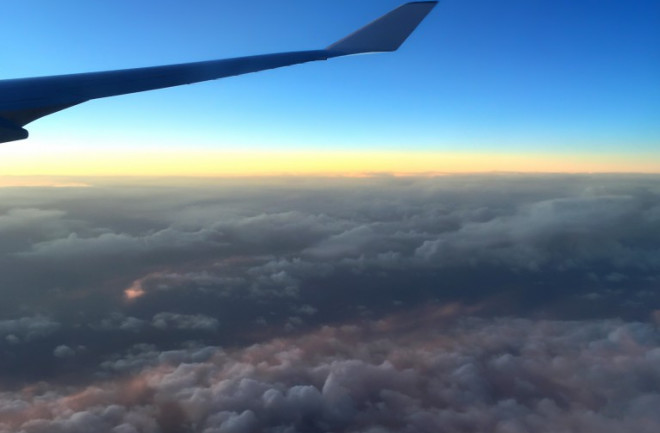 Through the window of a 747-400 over the North Atlantic on Thursday, Jan. 15, 2014. (iPhone Photo: © Tom Yulsman) Pic of the Day Yesterday, just as a second blast from a powerful "weatherbomb" was about to hit Ireland, I was high above in a Lufthansa 747-400, on my way to Frankfurt, Germany. The sun was rising above the thick soup below, casting an ethereal peach glow on the roiling clouds, so I pulled out my iPhone and grabbed the shot. To make things even better, a bright crescent moon was floating in a stunning deep-blue sky. The storm brought gales, snow, rain and high surf to Ireland and the British Isles starting last Wednesday, Jan. 14th and continuing again on the 15th. And by the way, "weatherbomb" is not my term for the storm. It comes from a meteorological process called "bombogenesis" in which the central pressure in a storm drops rapidly. Andrew Freedman explains it nicely at Mashable. The second blast of storminess that I witnessed from above was the result of a storm that originally stretched all the way from the east coast of the United States to Europe. In the satellite image below, I've drawn a line tracing the long swath of water vapor that stretched all the way across the Atlantic.

A satellite image of atmospheric water vapor acquired at about 10:30 GMT. (Source: RealEarth/SSEC) When I shot the image at the top of this post, I was flying from Denver to Germany on the first leg of a journey to Tromsø, Norway. We departed about 45 minutes late because of a technical glitch with the plane's lighting. But we made up all of the lost time, thanks to a particularly strong jet stream. The powerful winds have left a trace in the image above. Here's how the Weather blog of the Cooperative Institute for Meteorological Satellite Studies explains what was happening:

Note the strong dry-to-moist (darker blue to white to green color enhancement) along the northern edge of the trans-Atlantic water vapor image moisture feed: such a moisture gradient often coincides with the axis of a strong jet stream.

A week ago, passenger aircraft flying from New York City to London were making it in record time (not counting the Concorde) thanks to powerful jet stream winds. (I'm glad for them, since without the push I would have missed my connecting flight in Frankfurt for Norway.) I'm here in Tromsø to attend the Arctic Frontiers conference starting on Sunday. I'll be posting a commentary about it here soon.