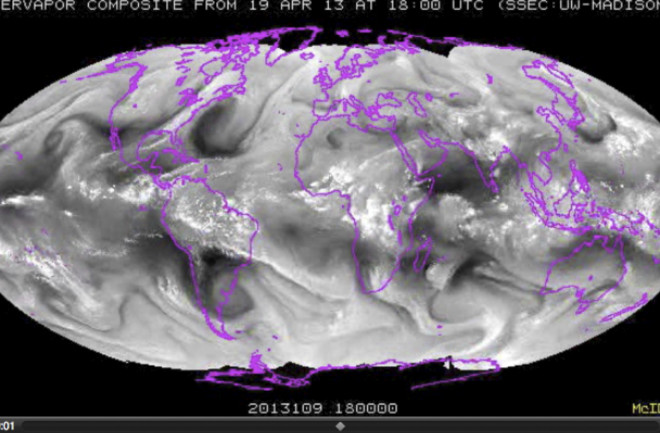 A screenshot from an animation using imagery from the GOES-East, GOES-West, Meteosat, and MTSAT satellites shows the flow of water vapor through the atmosphere between April 15 and 25, 2013. Click on the image to see the animation. (Image: Courtesy Cooperative Institute for Meteorological Satellite Studies) If there are any extraterrestrials out there in the universe looking for evidence that they are not alone, it's not unlikely that they're hunting for planets where conditions favor the existence liquid dihydrogen oxide. That would be water, of course. While there are hints that maybe life can get by without dihydrogen oxide in its liquid form, for the most part scientists think it is an absolute prerequisite. So much so that NASA's astrobiology program is predicated on the idea that habitable environments include, by definition, "extended regions of liquid water." So back to those aliens... Should they have technology powerful enough to get a glimpse of Earth, they may well image us in different wavelengths — including bands in the infrared portion of the spectrum that are particularly sensitive to infrared. And those bands could reveal something like the image at the top of this post. It's a screenshot from an awesome animation of water vapor coursing through our atmosphere over 10 days in April. Click on it to see the animation. Of course, those aliens may also see our planet in the visible portion of the electromagnetic spectrum, which would show that the atmosphere isn't the only part of our planet laden with water. They'd see that most of the surface is taken up by oceans, and that another sizable portion is covered by frozen water in the form of ice sheets and glaciers. If they were able to take detailed measurements, they'd come up with something like this:

Image: USGS — http://ga.water.usgs.gov/edu/2010/gallery/global-water-volume.html The biggest blue sphere represents the volume of liquid water on Earth relative to our planet's total volume. According to the U.S Geologic Survey, if you gathered it all up, it would measure 860 miles across (the distance from Salt Lake City, Utah, to Topeka, Kansas). And it would have a volume of about 3.5 million cubic miles. The smaller sphere over Kentucky represents the volume of Earth's liquid fresh water. It's diameter is just shy of 170 miles, and its volume is 2,551,100 cubic miles. Lastly, the tiny blue dot is just the water in lakes and rivers. That's the water that most human beings depend on, and it's only 35 miles across. So like Mars and Venus, we're on a big ball of rock orbiting within the Earth's habitable zone. But one of the main things that sets us apart from our planetary neighbors is the liquid water that forms a thin veneer over 70 percent of Earth's surface. I say "thin" advisably, since the oceans, seas and bays comprise some 321 million cubic miles, of 97 percent of the total water on the planet. Meanwhile, the water vapor that circulates so dramatically in the atmosphere, as seen in the animation linked to from the image at the top of this post, makes up just 0.001 percent of Earth's total water. But without it, we wouldn't have rain or snow — or a dynamic hydrologic cycle that makes our water world the only place in the universe we know of so far that harbors life.