Water Used to be on Mars, and in the Colorado River

Recent Curiosity rover findings may be definitive proof there was once water flowing on Mars. NASA has uncovered rounded pebbles on the planet’s surface. “Rounded pebbles of this size are known to form only when transported through water over long distances,” states a press release from the University of California, Davis, which has professors working on the Mars Curiosity mission. 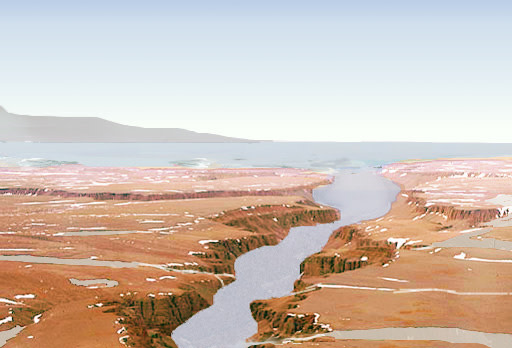 An artist's rendition of what rivers may have looked like on Mars. Photo courtesy NASA/JPL. Water is life. And so this new evidence bolsters the theory that Mars once hosted lifeforms. (June 10 update: More evidence now suggests that the water on Mars could even have been of drinking water quality for familiar forms of life.) The pebbles, which range in size from sand grains to golf balls and may have been deposited more than 2 billion years ago, are not the only evidence of a past river in the region. The team choosing landing sites for Curiosity knew there was an alluvial-fan-like formation here, with sediments fanning out as they would in the Mississippi River, Colorado River or Nile Deltas. (Read more about the findings on Mars on NASA’s site.)

Left: Where NASA scientists think a river or stream once flowed on Mars. Photo courtesy NASA/JPL. Right: The dry bed of the Colorado River, just south of the U.S.-Mexico border, in 2012. Photograph by Tasha Eichenseher. I can’t help but compare the findings on Mars to the most recent headlines about the fate of the Colorado River, which runs through some Martian-looking terrain, and is running dry. 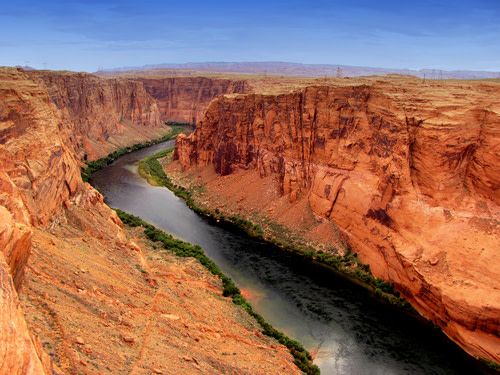 The Colorado River makes its way through the Grand Canyon. Photograph by atm2003/Shutterstock. The river provides drinking and irrigation water for tens of millions of people in the seven states it flows through, and Mexico, where it is supposed to drain into the Gulf of California and the Pacific Ocean. It has been pulled in so many directions that there have been many years in which it doesn’t reach the sea, leaving a dry delta scattered with the occasional polished pebble. According to the Bureau of Reclamation, which manages much of the river, there is no longer enough in the Colorado to support current housing, industrial, farming and energy water demands from the river. (Read the 2012 Colorado River Basin Water Supply and Demand Study.) Various projections and models predict that climate change, snowpack changes and western drought are expected to reduce the river's flows by an additional 10 to 30 percent by 2050. Escalating drought conditions have left the Colorado’s most mighty reservoirs –Lake Powell and Lake Mead – at risk of shrinking to 45 percent of capacity by the end of the year. They haven’t seen such low levels since 1968. Last month, the nonprofit American Rivers named the Colorado the country’s most endangered river. Having attracted a fair amount of attention over the last decade, the Colorado may be on the mend. There are efforts underway to restore flow, and a bi-national agreement was signed last November to return the river to the sea and replenish its delta. So, the host of species that rely on the Colorado may not be headed toward the same fate as Martian life, yet. More to come on the Colorado River...