Watch the Breath of the Earth in This Very Cool Animation 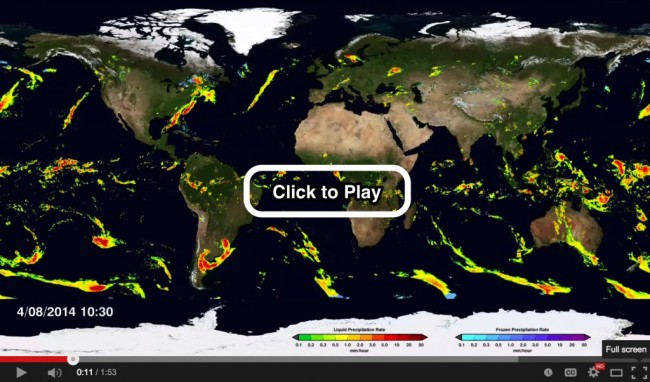 Driven by energy from the Sun, air circulates in our planet's atmosphere in complex but regular patterns. Call it the breath of the planet. And now you can watch it, thanks to this video released by NASA. When you watch it, you won't exactly be seeing the wind itself. But you will see the weather systems that, in a sense, make those winds visible. More specifically, the animation is the first ever to offer a global mapping of rainfall and snowfall. And it consists of data from 12 satellites that have been integrated into a single, seamless map using a system called IMERG. The animation covers the period from April to September 2014. And the precipitation data it portrays covers the 87 percent of the Earth that falls between 60 degrees north and 60 degrees south latitude, updated every half hour. 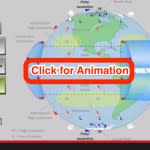 For an excellent visual explanation of the atmospheric circulation patterns that drive the storm systems visible in the animation, please click on the thumbnail image at right. And here is how NASA describes the movement of storms systems around the globe:

Falling rain and snow are essential parts of Earth's water cycle, which moves water and heat energy around Earth. Near the equator where the sun's heat drives evaporation that keeps the air moist, rain systems move westward in a steady stream. At higher latitudes, which have not previously been observed in 3-D with high-resolution precipitation sensors, enormous storm fronts march eastward across North America and Europe in the Northern Hemisphere, and across the Southern Ocean that surrounds Antarctica.

The visualization represents a number of firsts, including the ability to track light rain and snow through the high latitudes and across oceans. This has proved to be a difficult challenge in the past. NASA hopes the IMERG system will help scientists gain a better understanding of precipitation patterns, which in turn could be used to improve computer model predictions of future climate change. It could also help improve short-term weather forecasting models. http://youtu.be/qh011eAYjAA Speaking of models, the animation above shows global air circulation as simulated by the Community Climate System Model (CCSM) and the National Center for Atmospheric Research (NCAR). The simulation spans one calendar year, and it consists of hourly data. Cloud cover appears whitish with areas of precipitation shown in orange.