Watch Out For Joaquin 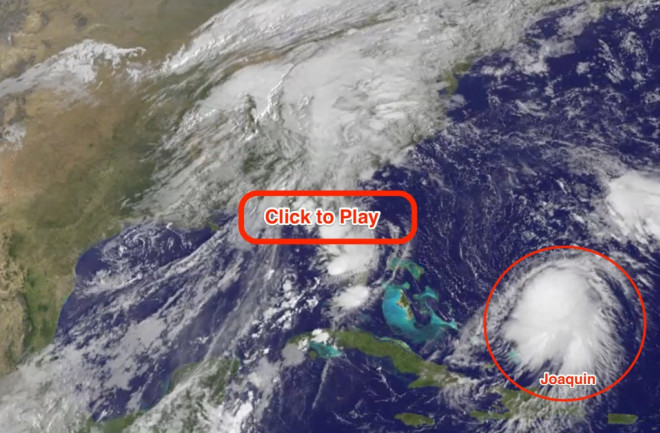 An animation of satellite imagery shows the birth of Tropical Storm Joaquin in the tropical Atlantic Ocean. (Source: NASA GOES Project Science) | Please see updates and a correction below | A tropical depression that formed Sunday in the Atlantic has strengthened into a tropical storm that could bring a lot of rain to parts of the U.S. East Coast later this week — possibly on top of a big rainfall event that's already cranking up for the northern Appalachians and New England over the next several days. Click on the image above and say hi to Tropical Storm Joaquin. The forecast for Joaquin is highly uncertain at the moment, thanks to difficulties the weather models are having in dealing with the evolution of other weather disturbances that will likely affect the storm. This is especially true of a trough that's forecast to develop over the Southeastern United States, according to this morning's forecast discussion from the National Hurricane Center. While a large portion of the East Coast is within the forecast cone for tropical storm force winds, the highest probability right now is between 20 and 30 percent, as this graphic shows:

The probabilities of sustained (1-minute average) surface wind speeds equal to or exceeding 39 miles per hour — tropical storm force— for Tropical Storm Joaquin. This wind speed probability map is based in part on forecasts of the track, intensity, and wind radii from the National Hurricane Center. (Source: NHC) That could change over the next few days — in either direction. Joaquin could strengthen and make landfall, possibly even as a hurricane, or it could turn out to sea and never hit land. | Update 9/30/15: Here is the latest from the forecast discussion page of the National Hurricane Center:

Joaquin is expected to become a hurricane within 24 hours, with additional intensification likely thereafter.

But Joaquin's future track is still very highly uncertain. Some model runs take it completely out to sea. Others show the storm making landfall on the East Coast. The NHC's current official forecast "lies between these possibilities." I think at this point we should take it all with a grain of salt. | Whatever turn Joaquin takes, the U.S Eastern Seaboard already is in for heavy precipitation — independent of the storm. And Joaquin could later add insult to injury.

The 7-day forecast for precipitation over the United States. (Source: National Weather Service) Check out that angry orange and red blob sitting over almost the entire East Coast in the map above. You're looking at the forecast for total precipitation over the next seven days. It approaches nine inches in places. As Weather.com meteorologist meteorologist Ari Sarsalari puts it:

Regardless of whether the East Coast gets hit by a tropical storm directly or not, it is going to rain like crazy in the Northeast over the next couple of days.

So if you live along the East Coast, it's probably time to start battening down the hatches. | Correction and more updates: An earlier version of this post implied that Joaquin would contribute to the rainfall along the East Coast over the next couple of days. My friend and fellow blogger Bob Henson pointed out to me that the rainfall that's forecast for the northern Appalachians and New England will be coming from other sources. As he and Jeff Masters put it at Weather Underground:

Deep tropical moisture streaming northeastward from the Gulf of Mexico will lead to near-record high amounts of water vapor for the location and time of year. This moisture will intercept a preexisting frontal boundary, as rain-producing impulses move along the east side of the sprawling upper-level trough over the eastern U.S.

Even so, impacts from Joaquin could begin to be felt later in the week. As Jeff Halverson of the Washington Post's Capital Weather Gang blog puts it:

Though the forecast remains very uncertain, heavy rain, coastal flooding and strong winds are possible for the Mid-Atlantic and Northeast starting Friday.

One thing is for sure: Weatherwise, it is going to be a very interesting week...