False-color imagery from NASA's Terra satellite reveals the growth of the Thomas Fire from Dec. 4 through the 16th. (Images: NASA Worldview. Animation: Tom Yulsman) "Firefighters achieved huge successes yesterday during a BIG firefight to hold their line & SAVED hundreds of homes in Montecito." That was the news this morning about the horrific Thomas Fire burning in Santa Barbara and Ventura counties, as described by the Public Information Officer of the Ventura County Fire Department. Unfortunately, many of the heroic firefighters will have no rest today, as the weather situation looks grim: https://twitter.com/NWSLosAngeles/status/942446493058859009 "The #SantaAna wind is howling through #Ventura County in the vicinity of the #ThomasFire," Tweeted KEYT News Channel — although the situation in Santa Barbara County seemed somewhat better. As I'm writing this at midday on Sunday, the fire has grown to 269,000 acres, making it the third largest fire on record in California. If the blaze were a city, it would be the second largest in the state, topped only by L.A. https://twitter.com/gaufre/status/941809484334227457 Countless images and videos of the blaze have been posted to social media. So I thought that today I would offer a more synoptic perspective by using satellite images to create a time-lapse of the Thomas Fire. You can see the result at the top of this post. It consists of false-color images acquired by NASA's Terra satellite, starting on Dec. 4, 2017, right before the blaze got started, and continuing through the 16th. In the false-color scheme, burned areas are bright red, and orange shows areas of active burning. Here's another satellite view of the Thomas Fire, acquired yesterday: 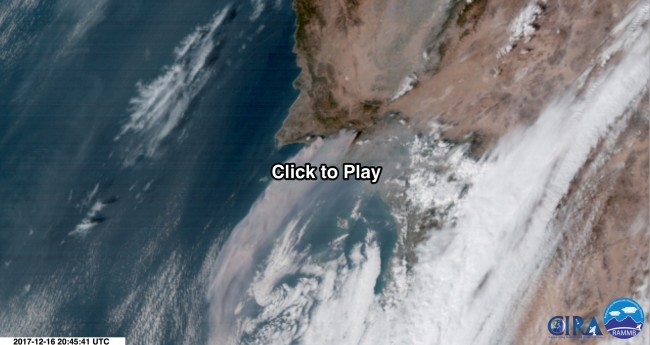 An animation of images from the GOES-16 weather satellite acquired on Dec. 16, 2017. (Source: RAMMB/CIRA/SLIDER) The images in this animation were captured by the brand new GOES-16 weather satellite. The spacecraft is now on station, and by December 20th it should officially be declared the operational GOES-East satellite. Make sure to click on the screenshot to watch the animation. It shows smoke carried on the wings of stiff Santa Ana winds blowing out to sea and then getting entrained by a cyclonic feature to the south. Nearly 9,000 wildfires have burned more than a million acres in California this year, according to statistics from the California Department of Forestry and Fire Protection. In terms of lives lost and properties destroyed, it is the worst year ever for wildfires in the state. Fourteen of California's 20 largest wildfires on record have all burned since 2000, according to an analysis by Climate Signals, a science information project that tracks the impacts of climate change. And research does indeed show that the fingerprint of global warming is evident in California's fires. "An increase in fire risk in California is attributable to human-induced climate change," concluded a 2015 study published in the Bulletin of American Meteorological Society. In the western United States overall, the number of wildfires and the area burned have both increased in recent decades. According to the most recent U.S. National Climate Assessment, human-caused climate change is contributing significantly to this increased fire activity by exacerbating drought and driving up temperatures.