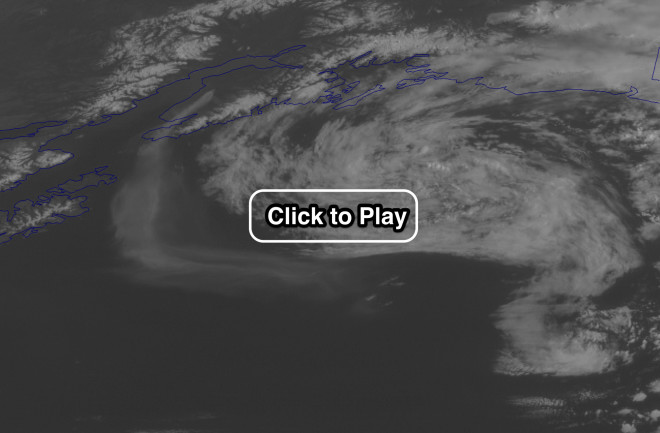 A cyclonic pattern of air flow in the Gulf Alaska pulls smoke from the Funny River Fire, as seen in this animation of GOES-15 satellite images acquired on May 20, 2014. Click on the image to watch the animation. (Source: CIMSS Satellite Blog) As firefighters struggled to contain a wildfire that's now raging on more than 44,000 acres of Alaska's Kenai Peninsula, the GOES-15 satellite captured this dramatic view. The animation consists of a series of images acquired by the weather satellite on Tuesday, May 20th. It reveals the smoke plume from the Funny River Fire being sucked into a pattern of cyclonic winds swirling in the Gulf of Alaska south and west of the peninsula. Here's another view of the fire as seen from space — this one captured by NASA's Aqua Satellite on the same day:

NASA's Aqua satellite captured this view of the smoke plume from the Funny River Fire as it was pulled into a cyclonic pattern of atmospheric circulation in the Gulf of Alaska on May 20, 2014. (Source: NASA) The cloud pattern shows the cyclonic wind flow pretty clearly, with the bluish smoke plume curling in the same direction. The red dots in the image show areas where a sensor on the Aqua satellite detected fire.

Source: Inciweb The Funny River Fire ignited on May 20th — cause still unknown. As of Thursday, the fire covered 44,423 acres within the Kenai National Wildlife Refuge and was only five percent contained, according to the U.S. Incident Information System. Anchorage is about 75 miles to the northeast. (Click on the thumbnail image at right for a photograph of the fire taken from the ground.) Very low humidity prompted the National Weather Service to issue a red flag warning for the region, in effect until 10 p.m. this evening (Friday).

A closer view of Alaska's Funny River Fire as seen by the Aqua satellite on May 20, 2014. The image reveals what appears to be pyrocumulus clouds, which often form over intense fires. (Source: NASA) In this view from the Aqua satellite, a thick smoke plume streams to the southwest, away from the fire. If you look closely at the source area you will see the tops of towering clouds popping up above the grayish smoke. To my eye, these look like pyrocumulus clouds, which often form above big, intense fires (and volcanic eruptions as well). Here's a great explanation from the "Weather Guys" at the Cooperative Institute for Meteorological Satellite Studies:

Here's what a pyrocumulus cloud looks like closer to the ground: