An animation of images captured by the Himawari-8 satellite shows Super Typhoon Soudelor (circled in the first frame) spinning in the Pacific Ocean toward Taiwan and mainland China on Aug. 4, 2015. See the story below for an explanation of the advancing line of darkness. (Images: RAMMB/NOAA. Animation: Tom Yulsman) Here we go again. Yet another Category 5 cyclone has roared to life — the sixth or seventh of the year (depending on how you count them — keep reading...), and the very strongest of 2015 so far. It's Super Typhoon Soudelor, and as I'm writing this, it is howling over the open Pacific with maximum sustained winds of 150 miles per hour, and gusts up to an astonishing 184 mph, according to the Joint Typhoon Warning Center. The forecast shows Soudelor churning toward a possible landfall in northern Taiwan as a Category 3 or 4 storm on Friday or Saturday local time. That would pose a risk to Taipei, Taiwan's largest city. Also, the rugged terrain of the island's interior could wring copious amounts of water from the storm and cause potentially ruinous flooding. After tracking across the island, Soudelor is forecast to cross the Taiwan Strait and make landfall in China near Fuzhou. The unusual animation above shows the storm spinning in the Pacific. I created it using satellite images covering Earth's full disk. I've circled Soudelor in the opening frame, which was captured by the Himawari-8 satellite at about 6 a.m. UTC today. That would be 3 p.m. local time. The animation goes in 10-minute time steps. You might be wondering, what's up with that advancing darkness across Earth's disk?  You're watching the advance of nighttime across the Pacific. I thought it made for a particularly striking visual experienced. So I had to lead with it.

An animation of satellite imagery showing Super Typhoon Soudelor and the storm's forecast track. (Source: Cooperative Institute for Meteorological Satellite Studies) The animation above consists of infrared satellite imagery showing Super Typhoon Soudelor spinning in the Pacific today over the course of six hours. The storm's forecast track is given, along with a cone of uncertainty. I mentioned that this is either the sixth or seventh Category 5 tropical cyclone of the year. The actual number depends on whether Cyclone Bansi is counted as a Category 5 storm. For more details about this, see this post by Jeff Masters Bob Henson over at Wunderground.com. Suffice it to say that the long-term average (1990-2014) for Category 5 storms is 4.6. [Update: My apologies to the fabulous folks at Weather Underground for that error!] "It's not out of the question we could break the record total of 12 Category 5 storms notched in 1997, when--much like this year--a strong El Niño was ramping up," Masters writes. 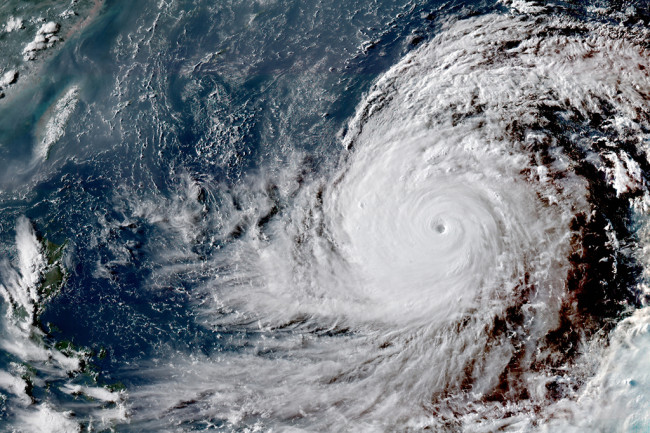 Just before landfall, a National Weather Service NEXRAD radar image showed the eye of Soudelor to be only about 4 nautical miles in diameter, surrounded by an miniature ring of showers and thunderstorms . . . This is among the smallest eyes and eyewalls observed anywhere as a tropical cyclone was making landfall.

Over the next 12 hours, the storm ballooned in size and strength. As the Washington Post's Angela Fritz puts it:

. . . a period of rapid intensification common in small storms amid very favorable environments. Sea surface temperature is more than warm enough to support a very strong storm, and wind shear, which acts to weaken typhoons and hurricanes, is low.

This is a beast of a storm now.