WATCH as a cyclone lumbers and lurches like a zombie for two weeks, finally clobbering SoCal, triggering mudslides 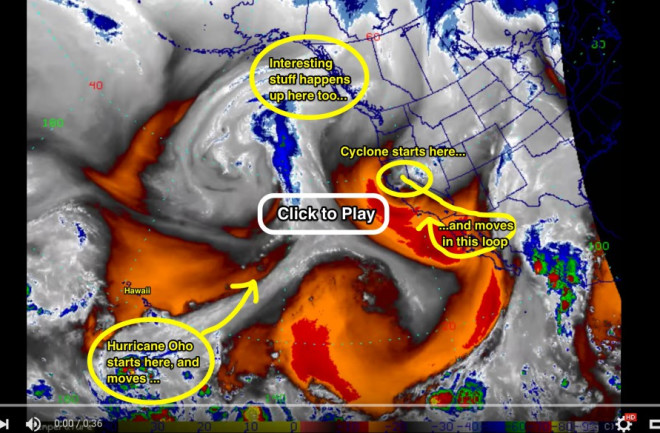 An animation of GOES-15 satellite water vapor imagery shows the evolution of several atmospheric features between Oct. 2 and 16, including a cyclone that wandered in a strange loop. I've annotated the screen capture to help you locate the features of interest. (Source: RAMSDIS Online/NOAA) I simply could not resist using the word "zombie" in my headline for this piece. (I'm convinced that I was a New York Post headline writer in a former life...) But honestly, I think it's legit in this case. To see why, have a look at my annotated screen-grab above and make note of the starting position of the cyclone I've marked, and its eventual track. Then, click on the image. What comes up is an animation of satellite water vapor imagery. Watch how the cyclone wanders around over the course of two weeks. Kind of aimless, yes? Kind of like a zombie maybe? I'll explain what it actually was in just a second. But first, this Thing was more than a mere meteorological curiosity. It slammed Southern California not once but twice (like a zombie it kept coming...), and it was responsible for the torrential rainfall in parts of Southern California late last week. This is the rain that brought on the mudslides that caused all that mayhem you might have heard about. If you didn't hear about it, check out this drone video footage posted to Youtube by Edward Czajka: https://www.youtube.com/watch?v=CgX482ShUCg The mudslides trapped hundreds of cars. And as I'm writing this, they're still digging out. (Here are some amazing photos...) Back now to the cyclone captured in the animation... What specifically does it do? It makes a big, weird loopdydoop (technical term) around the southwestern United States. The cyclone started life in early October as an upper-level low pressure system over Canada. From there, it moved south into California. The animation picks up the action toward the end of Oct. 2 in Northern California. From its starting point in the video, the cyclone drops farther south through California before heading east across Arizona, then into Mexico near the Texas border (where it kicked up some significant thunderstorm activity). At this point, the system lurched back toward the west, stumbling across the Baja Peninsula and out into the Pacific Ocean. Once out over those freakishly warm waters, it lurched again toward the northeast, making a beeline for the Southern California coast.

NASA's Aqua satellite captured this image of storms over Southern California on Oct. 15. Torrential rainfall led to flooding and mudslides along highways, including California Route 58 near Tehachapi Pass. (Source: NASA Worldview) Making landfall, it caused the mayhem I described previously. Keep reading for an explanation of what finally drove a stake through its heart. (Wait, wrong metaphor...) First, though, just what was this thing? It was, in meteorological terms, a "cutoff low pressure system." As the animation shows, it moved in a relatively slow and uncoordinated manner, much like a zombie. And "uncoordinated" really is precisely the right word. That's because a cutoff low like this, by definition, becomes completely displaced — cut off — from the prevailing westerly jet stream currents of the atmosphere. These currents ordinarily coordinate how weather systems move. But when this low was cut off, it was able to move around independently of the jet stream, influenced only by the complex interplay of other weather systems. How weird was this one? As it turns out, Jeff Halblaub, a meteorologist with National Weather Service office in Hastings, Nebraska, addressed this very question recently in a post here. As he put it:

The longevity of this low is pretty amazing and it's indicative of a couple things: 1) The jet stream pattern has not changed much over the past two weeks. 2) The jet stream has remained far enough to the west, north, and east of the low to largely leave it alone. While lows decouple from the jet stream quite frequently, they typically don't last this long over the United States. Much of the time, dips or "troughs" in the jet stream will exert enough influence to break them up and lift them to the north, where their remnants are absorbed by the jet stream.

That's exactly what finally happened when the cut-off low returned to California. Watch the animation again and you can see it finally getting splooshed (another technical term). And while you're at it, look in the lower left corner of the animation for the development of Hurricane Oho near Hawaii. It's pretty cool how it forms and then takes off to the northeast. Oho's stormy remnants eventually plaster the Pacific Northwest, followed by an exquisitely formed whorl of low pressure that adds yet more moisture to the region. Let's hope El Niño will begin bringing more moisture to precipitation-starved California in the coming months — but minus the mudslides and other calamities.