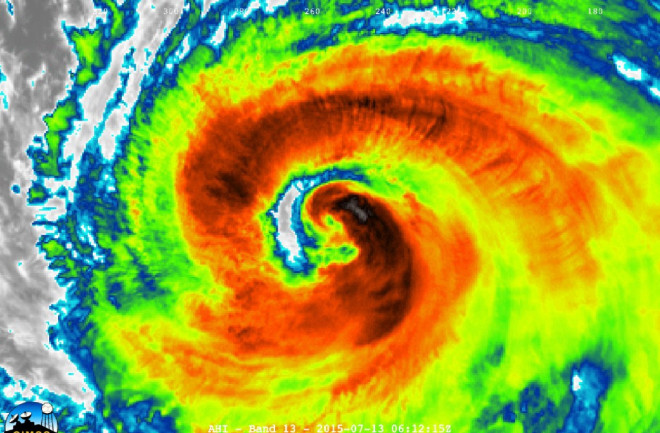 Typhoon Nangka in the western Pacific Ocean, as seen by the Himawari-8 satellite. You can find a link to a dramatic animation of images of the storm in the story below. (Source: Cooperative Institute for Meteorological Satellite Studies) The image above is a screenshot from a stunningly beautiful animation showing Typhoon Nangka swirling in the Pacific. More about that animation in a minute. But first...

Forecast track for Typhoon Nangka. (Source: JTWC) The storm is headed for landfall near city of Kochi on Japan's southeast coast some time after nightfall on Thursday, local time. The Joint Typhoon Warning Center forecasts maximum sustained winds at landfall of about 80 miles per hour and gusts up to about 100. (Click on the thumbnail at right for a map of the forecast track.) Typhoon Nangka is likely to bring more than a foot of rainfall to the mountainous region where the storm will barge ashore. (For more detail on the current forecast, see Angela Fritz's story at the Washington Post's Capitol Weather Gang blog.)

The storm is approaching Japan at an unusual angle that heightens the risks. Typically, tropical cyclones curve to the northeast as they near Japan, causing them to track more or less parallel to the coast. But Typhoon Nangka will strike perpendicular to the coast. This may boost the storm surges. For more about that, as well as the very active cyclone season now underway, see Bob Henson's post over at Underground.com. Now, about that animation. It is from the Cooperative Institute for Meteorological Satellite Studies (CIMSS) at the University of Wisconsin. Before I get to the link, please be aware that it is a VERY large gif file — more than 120 megabytes. So unless you have a very fast internet connection, it will take awhile to load — perhaps two minutes. But it will be well worth your wait. My advice: Click on the link below, which will open a new tab and take you to the video on the CIMSS site. While the animation is loading, come back here to read about the details of what the video shows. And then go back to watch the animation. With that out of the way, click here for the animation. The infrared images that make up the animation were acquired by the Himawari-8 satellite every 2.5 minutes over the course of 10 hours on July 13. That short timestep, and the high resolution of the images, produces a dramatic and detailed view of the dangerous storm. (As well as the large file size.) Himawari-8 was watching just as Typhoon Nangka developed a double eyewall — meaning two concentric rings of intense convective storm activity surrounding the relatively calm and clear eye of the cyclone. The double eyewall structure usually indicates that a tropical cyclone is going through an "eyewall replacement cycle," or ERC. When that happens, the inner eyewall weakens and is then replaced by the outer one. This is usually accompanied by a temporary weakening of the cyclone. (For more detail on this process, go here.) Once the animation of Himawari-8 images loads, watch it and see if you can spot the double eyewall. Look for the eye at the center of the cyclone's circulation — it's shown in a blue, white and gray tones. Surrounding that is a red-orange wall of intense storm activity. Beyond that is a moat similar in color to the eye, and then another wall of orange-red. Here's what those colors signify: When viewing a cyclone in the infrared portion of the light spectrum, you're actually looking at the temperature of the storm's features. The white and gray tones in the animation show progressively warmer temperatures. Here, parcels of air are descending and warming within the cyclone's eye. Meanwhile, the yellow, orange, red and rust colors are indicative of progressively colder temperatures. The deepest reds show where extremely powerful updrafts are causing parcels of air to rise very high into the atmosphere, cooling significantly as they go. https://twitter.com/philklotzbach/status/620587647430365184/photo/1 Typhoon Nangka is part of a remarkable upsurge in cyclone activity in the Pacific Ocean, linked in large measure to warm sea surface temperatures. In fact, as the graph in the Tweet above shows, by a measure known as "accumulated cyclone energy," or ACE, the Northwest Pacific has already set a record for most active season. We've still got four months during which typhoon activity in the Pacific is typically highest. And with El Niño promising continued warm sea surface temperatures, we may well have seen nothin' yet.