Watch a dust storm kicking up over Mexico and the southwestern United States, as seen from space 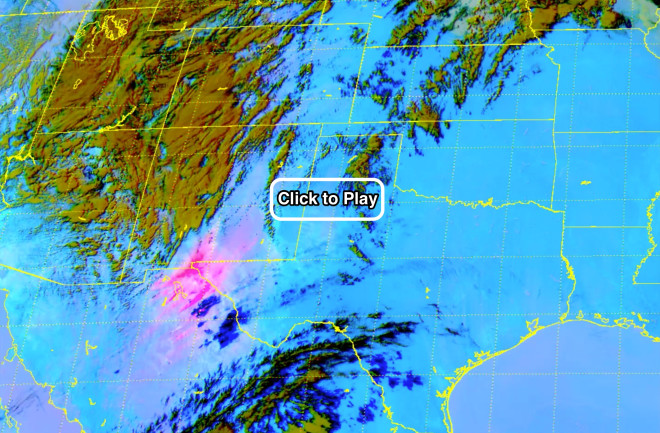 A screenshot from an animation based on GOES-16 weather satellite data showing a major dust outbreak in Mexico and the southwestern United States. The dust is shown in pink colors. Please click to watch the animation. (Animation source: GOES-16 Loop of the Day, CIRA/RAMMB/NOAA) Right after Earth Day, I published the first installment of what I said would be semi-regular posts showcasing the dazzling imagery now being produced by the new GOES-16 weather satellite. As promised, here's a new one — a spectacular animation. On March 23rd, the spacecraft observed a major dust storm over Mexico and the southwestern United States. The dust was picked up by strong southwesterly winds related to a deep trough over the western U.S.

SEE ALSO: Here’s the first installment in a new series at ImaGeo: dazzling imagery from the new GOES-16 weather satellite

In the animation, the dust storm is depicted in pink colors. High level clouds are dark blue, and low level clouds are light brown and green. The greatly enhanced geographic and temporal detail offered by GOES-16 promises improvement in weather forecasting. But I'm struck most by the breathtaking beauty of this animation, and others like it. I found it, by the way, at the GOES-16 Loop of the Day page. If you are a weather and remote sensing geek like me, you might like it. Lastly, I must note this one caveat: GOES-16 is now on its shakedown cruise. Scientists are still testing everything out and evaluating the data being returned by the satellite. So it is not yet officially operational.