Warming of globe in 2015 shattered all previous records 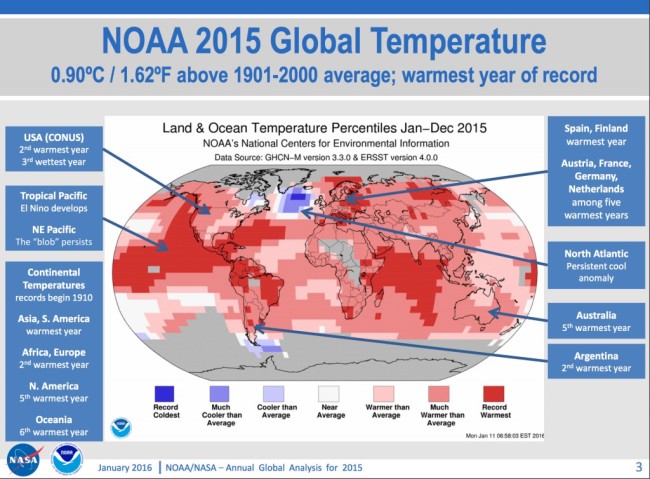 This past year was by far the warmest in records that stretch back more than a century, two U.S. federal agencies announced this morning. Gavin Schmidt, director of NASA's Goddard Institute for Space Studies in New York, began the briefing by saying, "2015 was by far the warmest year in the records we have put together." "We're really looking at a long-term trend," he said. "This is just a symptom of that long-term trend." The cause: "increasing burning of fossil fuels and the carbon dioxide that come with that." While El Niño contributed to the warmth seen this past year, "the trend over time is why we’re having a record warm year," he said. 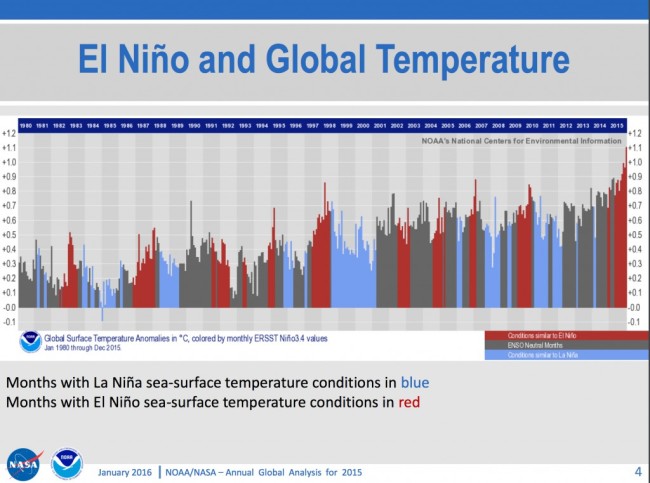 NASA and NOAA reached their conclusions based on independent analyses. Thomas R. Karl, director of NOAA's National Centers for Environmental Information in Asheville, North Carolina, said his agency's analysis concurred with NASA's. "In our data set we were by far warmer than any other year, breaking the temperature record set previously in 2014 by a quarter degree Fahrenheit," he said. He noted that there was "quite a large separation from the previous record, set just last year." This was a "rather remarkable part of the story this year." I am getting ready to leave for the Arctic Frontiers conference in Tromsø, Norway, so I'll have to leave it there. But for more detailed information, go here. And I'll have more to say soon about the warming we saw in 2015 — from a part of the world that has actually warmed twice as fast as any other.