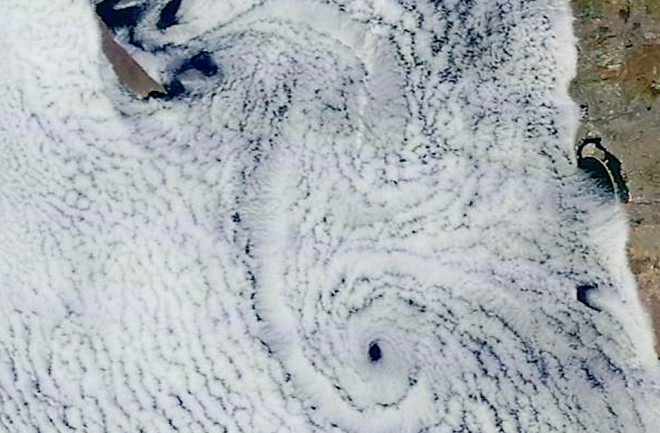 A vortex swirls in the cloud deck above the Pacific Ocean downwind of San Clemente Island in this image captured by NASA's Terra satellite on June 26th. The island is at upper left. San Diego is located on the coast just at middle right. In my last post, I used a large-scale, composite satellite image to illustrate the broiling heat wave that's spreading out across the western United States. But I also made note of the fascinating detail I spotted in the Pacific Ocean off California and Mexico, and I asked whether you could spot a hurricane-like feature in the cloud deck. Here it is, in close up, in the image at the top of the post. And of course it's not a hurricane. I'm not certain, but I believe it is a Von Karman vortex. Here's a fabulous little animation of the phenomenon:

This animation was posted originally by the Goddard Earth Sciences Data and Information Services Center, which offers an excellent detailed explanation. In short:

From the perspective of physics, both the ocean and atmosphere are actually fluids. And when the movement of a fluid is disrupted by an obstacle, the flow is disrupted downstream. In the case of the feature captured in the satellite image at the top of this post, San Clemente Island at upper right is an obstacle. And it appears to have disrupted the airflow over and around it in such a way as to produce the vortex feature in the clouds lower down in the image.

Typically, a line of such vortices forms downwind of an island obstacle. They're called vortex streets. Here's another explanation with a cool image from NASA's Earth Observatory. (And an example of a different kind of disturbance that can form behind islands, from one of my previous posts: "Ocean Comet.")

In this case, however, I see just one. I'm not exactly sure why that would be the case. I've sent a message to the folks at the Earth Observatory seeking some insight from them. When I hear back, I'll post an update.