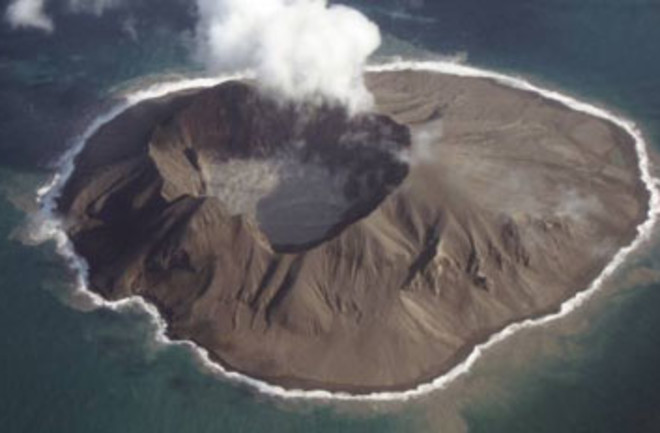 A recent volcanic eruption let scientists watch Mother Nature try out one of the geoengineering schemes that has been proposed to reduce the amount of carbon dioxide in the air, and therefore cool the planet. But the results of this natural experiment left a lot to be desired. The geoengineering technique known as ocean fertilization calls for scientists to dump iron into the ocean to "fertilize" it and spur blooms of phytoplankton. These tiny photosynthetic organisms will suck up CO2 as they grow, the thinking goes, but will then die and tumble down to the sea floor, where the CO2 will be safely stored in the heaps organic matter. The same thing can happen naturally, though, if a volcano happens to erupt and spews iron particles over the ocean. That's exactly what happened in the summer of 2008.

In August 2008, scientists in the northeastern Pacific Ocean were shocked to witness a sudden, huge spike in the area's plankton population. Their investigation traced the bloom to an ash cloud from a volcano that had erupted in the Aleutian Islands only a few days before. The ash, it turned out, had fertilized the ocean with thousands of tons of iron, on which the plankton gorged. [ScienceNOW]

Researchers determined that the plume of ash from the Kasatochi volcano had been caught up in a severe windstorm, which helped disperse the material over a wide swath of ocean. The result, one of the researchers told LiveScience

, was an "ocean productivity event of unprecedented magnitude." So they set about monitoring the massive plankton bloom to see if it really would suck up carbon and drag it down to the bottom of the sea. The results, which they published

in the journal Geophysical Research Letters, suggest that a manmade campaign of ocean fertilization wouldn't have as big an effect as people hope. Lead author Roberta Hamme explains that the huge plankton bloom absorbed 4 million tons of carbon dioxide--which sounds great, until you hear that the ocean naturally absorbs 8.1 billion tons of CO2 a year, and that the burning of fossil fuels releases about 26.4 billion tons annually.

"Despite the huge area of iron addition and the optimal time of year when there was plenty of sunlight, the impact of this August 2008 event in terms of carbon dioxide absorption was quite small," Hamme said. "This tells us that iron fertilization would have to be performed on a truly gigantic scale to have an impact on our climate." [LiveScience]

So would-be geoengineers who had their eye on ocean schemes should probably head back to the drawing board, says Philip Boyd, an atmospheric scientist who had conducted iron fertilization experiments:

"If I were a geoengineer and had a couple of venture capital people on the line I'd direct them elsewhere," Boyd said. [Discovery News]

80beats: Obama’s Science Adviser Kicks Up a Fuss Over Geoengineering